Ethernet is a contention media access method that allows all hosts on a network to share the same bandwidth of a link. Ethernet is popular because it's readily scalable, meaning that it's comparatively easy to integrate new technologies, such as Fast Ethernet and Gigabit Ethernet, into an existing network infrastructure. It's also relatively simple to implement in the first place, and with it, troubleshooting is reasonably straightforward.

Ethernet networking uses Carrier Sense Multiple Access with Collision Detection (CSMA/CD), a protocol that helps devices share the bandwidth evenly without having two devices transmit at the same time on the network medium. CSMA/CD was created to overcome the problem of those collisions that occur when packets are transmitted simultaneously from different nodes.

When a host wants to transmit over the network, it first checks for the presence of a digital signal on the wire. If all is clear (no other host is transmitting), the host will then proceed with its transmission. The transmitting host constantly monitors the wire to make sure no other hosts begin transmitting. If the host detects another signal on the wire, it sends out an extended jam signal that causes all nodes on the segment to stop sending data (like a phone busy signal). The nodes respond to that jam signal by waiting a while before attempting to transmit again. Backoff algorithms determine when the colliding stations can retransmit. If collisions keep occurring after 15 tries, the nodes attempting to transmit will then time out.

Half- and Full-Duplex Ethernet

Half-duplex Ethernet is defined in the original 802.3 Ethernet; Cisco says it uses only one wire pair with a digital signal running in both directions on the wire. Certainly, the IEEE specifications discuss the process of half duplex somewhat differently, but what Cisco is talking about is a general sense of what is happening here with Ethernet.

It also uses the CSMA/CD protocol to help prevent collisions and to permit retransmitting if a collision does occur. If a hub is attached to a switch, it must operate in half-duplex mode because the end stations must be able to detect collisions. Half-duplex Ethernet - typically 10BaseT - is only about 30 to 40 percent efficient as Cisco sees it, because a large 10BaseT network will usually only give you 3 to 4Mbps - at most. But full-duplex Ethernet uses two pairs of wires, instead of one wire pair like half duplex and full duplex uses a point-to-point connection between the transmitter of the transmitting device and the receiver of the receiving device. This means that with full-duplex data transfer, you get a faster data transfer compared to half duplex. And because the transmitted data is sent on a different set of wires than the received data, no collisions will occur. Imagine a freeway with multiple lanes instead of the single-lane road provided by half duplex. Full-duplex Ethernet is supposed to offer 100 percent efficiency in both directions - e.g., you can get 20Mbps with a 10Mbps Ethernet running full duplex, or 200Mbps for Fast Ethernet. But this rate is something known as an aggregate rate, which translates as "You're supposed to get" 100 percent efficiency.

Full-duplex Ethernet can be used in three situations:

Ethernet at the Data Link Layer

Ethernet at the Data Link layer is responsible for Ethernet addressing, commonly referred to as hardware addressing or MAC addressing. Ethernet is also responsible for framing packets received from the Network layer and preparing them for transmission on the local network through the Ethernet contention media access method. There are four different types of Ethernet frames available:

(MAC) address burned into each and every Ethernet Network Interface Card (NIC). The MAC, or hardware address, is a 48-bit (6-byte) address written in a hexadecimal format. Here is the 48-bit MAC addresses and how the bits are divided.

The organizationally unique identifier (OUI) is assigned by the IEEE to an organization. It's composed of 24 bits, or 3 bytes. The organization, in turn, assigns a globally administered address (24 bits, or 3 bytes) that is unique to each and every adapter they manufacture. Look at the figure and you will see that the high-order bit is the Individual/Group (I/G) bit. When it has a value of 0, we can assume that the address is the MAC address of a device and may well appear in the source portion of the MAC header. When it is a 1, we can assume that the address represents either a broadcast or multicast address in Ethernet, or a broadcast or functional address in TR and FDDI. The next bit is the G/L bit (also known as U/L, where U means universal). When set to 0, this bit represents a globally administered address (as by the IEEE). When the bit is a 1, it represents a locally governed and administered address (as in DECnet). The low-order 24 bits of an Ethernet address represent a locally administered or manufacturer-assigned code. This portion commonly starts with 24 0s for the first card made and continues in order until there are 24 1s for the last (16,777,216th) card made.

The Data Link layer is responsible for combining bits into bytes and bytes into frames. Frames are used at the Data Link layer to encapsulate packets handed down from the Network layer for transmission on a type of media access. There are three types of media access methods: contention (Ethernet), token passing (Token Ring and FDDI), and polling (IBM mainframes and 100VG-AnyLAN). The function of Ethernet stations is to pass data frames between each other using a group of bits known as a MAC frame format. This provides error detection from a cyclic redundancy check (CRC). But remember - this is error detection, not error correction! The 802.3 frames and Ethernet frame are shown in the following figure.

Since the 802.3 Ethernet frame cannot by itself identify the upper-layer (Network) protocol, it obviously needs some help. The IEEE defined the 802.2 LLC specifications to provide this function and more. Below is shown the IEEE 802.3 with LLC (802.2) and the Subnetwork Access Protocol (SNAP) frame types. 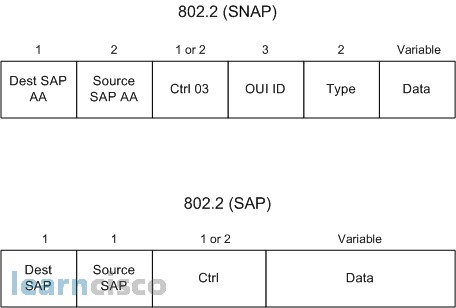 Ethernet at the Physical Layer

Ethernet was first implemented by a group called DIX (Digital, Intel, and Xerox). They created and implemented the first Ethernet LAN specification, which the IEEE used to create the IEEE 802.3 Committee. This was a 10Mbps network that ran on coax, and then eventually twistedpair and fiber physical media. The IEEE extended the 802.3 Committee to two new committees known as 802.3u (Fast Ethernet) and 802.3ab (Gigabit Ethernet on category 5) and then finally 802.3ae (10Gbps over fiber and coax).

The EIA/TIA (Electronic Industries Association and the newer Telecommunications Industry Alliance) is the standards body that creates the Physical layer specifications for Ethernet. The EIA/TIA specifies that Ethernet uses a registered jack (RJ) connector with a 4 5 wiring sequence on unshielded twisted-pair (UTP) cabling (RJ-45). However, the industry is moving toward calling this just an 8-pin modular connector.

Each Ethernet cable type that is specified by the EIA/TIA has inherent attenuation, which is defined as the loss of signal strength as it travels the length of a cable and is measured in decibels (dB). The cabling used in corporate and home markets is measured in categories. A higher quality cable will have a higher rated category and lower attenuation.

Here are the original IEEE 802.3 standards: