An IP address is a numeric identifier assigned to each machine on an IP network. It designates the specific location of a device on the network.

An IP address consists of 32 bits of information. These bits are divided into four sections, referred to as octets or bytes, each containing 1 byte (8 bits). You can depict an IP address using one of three methods:

The network address (which can also be called the network number) uniquely identifies each network. Every machine on the same network shares that network address as part of its IP address. In the IP address 172.20.18.125, for example, 172.20 is the network address. The node address is assigned to, and uniquely identifies, each machine on a network. This part of the address must be unique because it identifies a particular machine – an individual – as opposed to a network, which is a group. This number can also be referred to as a host address. In the sample IP address 172.20.18.125, the 18.125 is the node address. The designers of the Internet decided to create classes of networks based on network size. For the small number of networks possessing a very large number of nodes, they created the rank Class A network. At the other extreme is the Class C network, which is reserved for the numerous networks with a small number of nodes. The class distinction for networks between very large and very small is predictably called the Class B network. 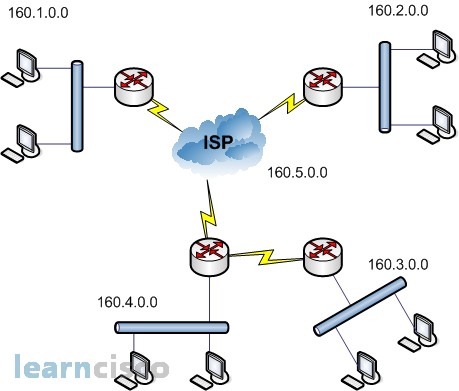 The design shown here requires six groups, each of which is a Class B network. The four LANs each use a single Class B network. In other words, the LANs attached to Routers A, B, C, and D are each a separate network. Additionally, the two serial interfaces comprising the point-to-point serial link between Routers C and D use the same network, because these two interfaces are not separated by a router. Finally, the three router interfaces comprising the Frame Relay network with Routers A, B, and C are not separated by an IP router and would comprise the sixth network.

The next image uses six subnets, each of which is a subnet of a single Class B network. This design subnets Class B network 160.30.0.0. The IP network designer has chosen a mask of 255.255.255.0, the last octet of which implies 8 host bits. Because it is a Class B network, there are 16 network bits. Therefore, there are 8 subnet bits, which happen to be bits 17 through 24-in other words, the third octet. 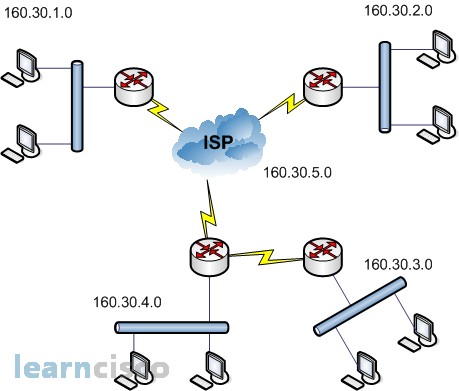 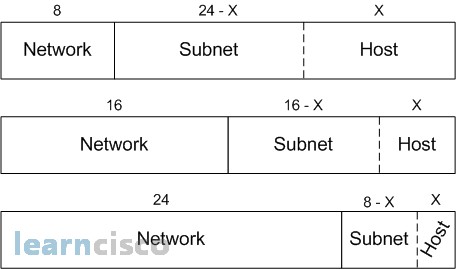