Extended IP access lists have both similarities and differences compared to standard IP ACLs. Just like standard lists, you enable extended access lists on interfaces for packets either entering or exiting the interface. IOS searches the list sequentially. The first statement matched stops the search through the list and defines the action to be taken. The one key difference between the two is the variety of fields in the packet that can be compared for matching by extended access lists. A single ACL statement can examine multiple parts of the packet headers, requiring that all the parameters be matched correctly in order to match that one ACL statement. That matching logic is what makes extended access lists both much more useful and much more complex than standard IP ACLs.

Here are shown several of the fields in the packet headers that can be matched. 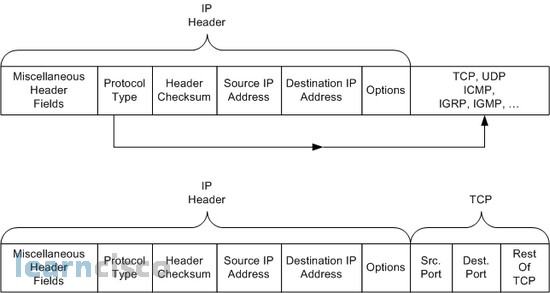 The top set of headers shows the IP protocol type, which identifies what header follows the IP header. You can specify all IP packets, or those with TCP headers, UDP headers, ICMP, and so on, by checking the Protocol field. You can also check both the source and destination IP addresses, as shown. The lower part of the figure shows an example with a TCP header following the IP header, pointing out the location of the TCP source and destination port numbers. These port numbers identify the application. For instance, web uses port 80 by default. If you specify a protocol of TCP or UDP, you can also check the port numbers.

IOS checks all the matching information configured in a single access-list command. Everything must match for that single command to be considered a match and for the defined action to be taken. The options start with the protocol type (IP, TCP, UDP, and others), followed by the source IP address, source port, destination IP address, and destination port number. Remember that the port numbers can be referenced only if the protocol type is configured as TCP or UDP.