This lesson helps us understand the challenges of using shared technologies like Ethernet. We will introduce you to use some of the requirements related to distance limitations and connectivity devices. Those devices include hubs, but we will focus on switches, and how they deal with collisions by defining collision domains.

Part of the job of some network elements is not only to aggregate and connect multiple machines but also extend the distance limitations by repeating or amplifying the signal. A hub is such a device which is traditionally used in Ethernet LANs in the early days, but it does not have the intelligence to manage bandwidth and multiple concurrent conversations efficiently. When the hub receives a signal, it will simply repeat that signal across all of the available ports. There are two problems with that: one, it will not process or have awareness of sources and destinations and so all machines will see all traffic from all other machines. This is inefficient and it will degrade performance for all machines. The second problem is that all machines share the same bandwidth, although each device connected to the hub will have its own cable in connecting to that hub, all of the devices compete for the same bandwidth.

Each hub represents one collision domain. A collision domain is defined by the number of machines and connecting devices that will be impacted by the jam signals that result from collisions. If you remember, your carrier sends multiple access collision detection theories behind Ethernet; every time two machines try to speak at the same time, they will sense a channel, notice the collision, and then send a jam signal to let everybody else know that they should not transmit at this time. In the case of a hub, all connected devices will see the jam signal and will stop transmitting. This type of environment with collisions will degrade performance and slow down the network. This is similar to multiple people trying to speak at the same time in a conference call. They will notice that they are interrupting each other and stop talking in trying to avoid the collision. 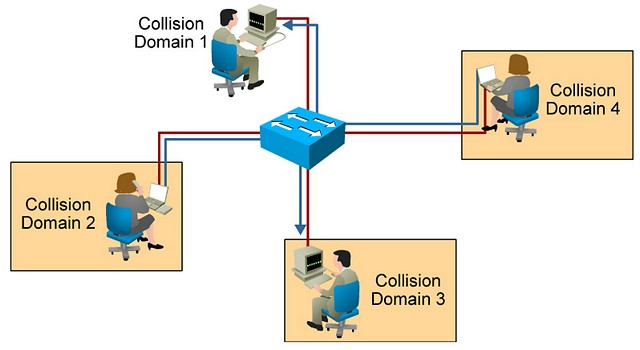 A solution to this is the addition of switches. In a switch, each port represents a collision domain. So the scope of the collision affects only that machine. In fact, you could say that in a switched environment, there are no collisions. One other thing that the switch adds is the intelligence to only forward traffic with knowledge of the sources and destinations. In other words, although the switch floods the traffic the first time it sees a source or destination, it will soon enough learn about the location of those sources and destinations in relevance or relative to the ports where those machines are located. After learning, the switch will not flood, but simply send packets to the intended destination only on the ports where those destinations reside.