VLANs are pretty simple in concept and in practice. The following list hits the high points:

When using VLANs in networks that have multiple interconnected switches, you need to use VLAN trunking between the switches. With VLAN trunking, the switches tag each frame sent between switches so that the receiving switch knows to what VLAN the frame belongs. Here is the basic idea: 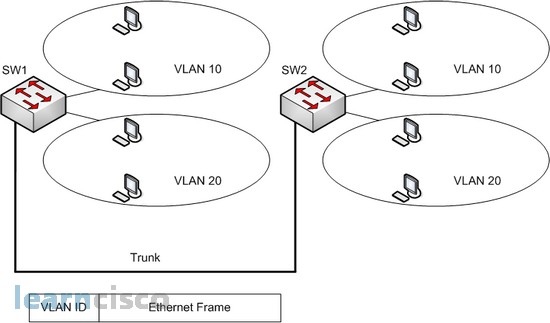 With trunking, you can support multiple VLANs that have members on more than one switch. For instance, when Switch 1 receives a broadcast from a device in VLAN 1, it needs to forward the broadcast to Switch 2. Before sending the frame, Switch1 adds another header to the original Ethernet frame; that new header has the VLAN number in it. When Switch 2 receives the frame, it sees that the frame was from a device in VLAN1, so Switch 2 knows that it should only forward the broadcast out its own interfaces in VLAN1.

Cisco created ISL before the IEEE standardized a trunking protocol. Because ISL is Cisco proprietary, it can be used only between two Cisco switches. ISL fully encapsulates each original Ethernet frame in an ISL header and trailer. The original Ethernet frame inside the ISL header and trailer remains unchanged.
The ISL header includes several fields, but most importantly, the ISL header VLAN field provides a place to encode the VLAN number. By tagging a frame with the correct VLAN number inside the header, the sending switch can ensure that the receiving switch knows to which VLAN the encapsulated frame belongs. Also, the source and destination addresses in the ISL header use MAC addresses of the sending and receiving switch, as opposed to the devices that actually sent the original frame.

The IEEE standardizes many of the protocols relating to LANs today, and VLAN trunking is no exception. After Cisco created ISL, the IEEE completed work on the 802.1Q standard, which defines a different way to do trunking.

802.1Q uses a different style of header than does ISL to tag frames with a VLAN number. In fact, 802.1Q does not actually encapsulate the original frame. Rather, it adds an extra 4-byte header to the original Ethernet header. That additional header includes a field with which to identify the VLAN number. Because the original header has been changed, 802.1Q encapsulation forces a recalculation of the original FCS field in the Ethernet trailer, because the FCS is based on the contents of the entire frame.

Both ISL and 802.1Q provide trunking. The header used by each varies, and only ISL actually encapsulates the original frame, but both allow the use of a 12-bit-long VLAN ID field. So, either works fine, and both support the same number of VLANs because both use a 12-bit VLAN Number field. ISL and 802.1Q both support a separate instance of spanning tree for each VLAN. ISL supported this feature much earlier than did 802.1Q, so in years past, one of the stated differences between the two trunking protocols was that 802.1Q did not support multiple spanning trees.

Something else, if you want to be sure that you will have interoperability between different vendor devices, you must use 802.1Q encapsulation.