Since about the year 2000, a lot of corporations have relied upon basic access points as their main wireless networks and connected them into an infrastructure, which allowed users to roam within their network. The following picture shows a typical infrastructure network, either with one access point or as an extended service set wherein you would have multiple access points – all using the same Service Set Identifier (SSID) for roaming purposes. 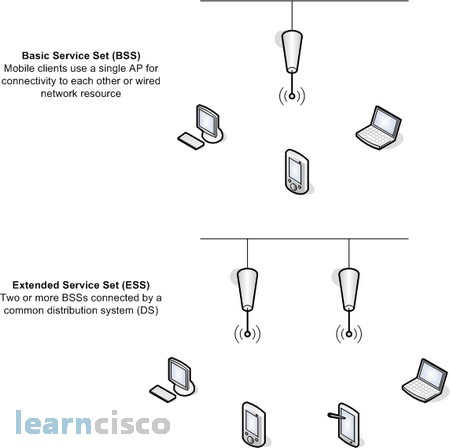 So what we see here is that each of the APs, in either configuration, is configured as a root AP. Basically, this means that each router is essentially saying, “Yo, wireless client, connect to me and get your goods (wired resources).” If the APs weren’t root, they could only connect to a root device as a repeater. Nonroot devices include clients, bridges, repeater access points, and work group bridges. This new, tricked-out technology includes intelligent Cisco APs and Cisco WLAN controllers specifically designed to support APs. The solution is managed either through the controller web interface, from the controller itself, or from Cisco’s Wireless Control System (WCS).

But the really sweet thing about this type of network is that after initial installation, it requires zero configuration. This means that you can connect an AP in an outdoor or indoor environment and the AP will automatically configure itself based on the controller’s information. It will even check for channel overlap and interference and assign itself a non-overlapping channel-how cool is that? And as I briefly mentioned earlier, if it happens to detect an overlapping channel within its area, it’ll lower its transmitting level to limit interference. Cisco calls this “auto RF controls.”

This odd-sounding name is actually a pretty cool feature. We’re basically splitting the processing of the 802.11 protocol between two devices, the AP and a centralized Cisco WLAN controller. The following scheme shows how the “splitting” of processing occurs at each location: 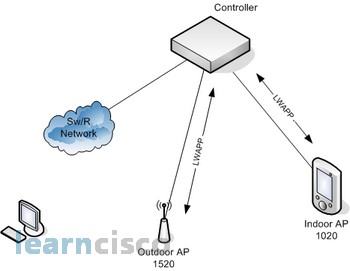 Although the 1520 AP and the 1020 AP appear to be directly connected to the controller in the figure above, they can’t be-first, because they’ve go to connect with a switch to provide 10/100 to gigabit conversion, and second, because the controller only forwards LWAPP packets coming from an LWAPP-enabled port. This means you need a router if you want to take an LWAPP packet and forward it out as IP data to a non-LWAPP network. A high-end switch can handle the routing.

The AP handles the portions of the protocol that have real-time requirements:

All remaining functionality is handled in the Cisco WLAN controller, so time sensitivity isn’t a concern but controller-wide visibility is certainly required. The following are some of the MAC-layer functions provided in the WLAN controller:

As more vendors migrate to a mesh hierarchical design, and as larger networks are built using lightweight access points, we really need a standardized protocol that governs how lightweight access points communicate with WLAN systems. This is exactly the role filled by one of the Internet Engineering Task Force’s (IETF’s) latest draft specification, Lightweight Access Point Protocol (LWAPP). With LWAPP, large multi-vendor wireless networks can be deployed with maximum capabilities and increased flexibility. Cisco’s mesh networking infrastructure is decentralized and comparably inexpensive for all the nice things it provides because each node only needs to transmit as far as the next node. Nodes act as repeaters to transmit data from nearby nodes to peers that are too far away for a manageable cabled connection, resulting in a network that can span a really large distance, especially over rough or difficult terrain. Here is shown a large meshed environment using Cisco 1520 APs to “umbrella” an area with wireless connectivity: 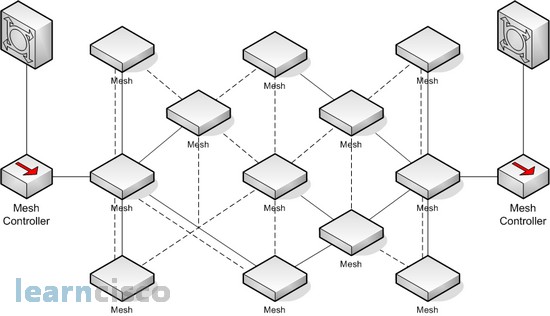 Plus, mesh networks also happen to be extremely reliable-since each node can potentially be connected to several other nodes, if one of them drops out of the network because of hardware failure or something, its neighbors simply find another route. So you get extra capacity and fault tolerance by simply adding more nodes.

Wireless mesh connections between AP nodes are formed with a radio, providing many possible paths from a single node to other nodes. Paths through the mesh network can change in response to traffic loads, radio conditions, or traffic prioritization. Cisco LWAPP-enabled mesh access points are configured, monitored, and operated from and through any Cisco Wireless LAN Controller deployed in the Cisco Mesh Networking Solution-and they must go through a controller, which is why having redundant controllers is an absolute necessary.

Each AP runs the Adaptive Wireless Path Protocol (AWPP)-a new protocol designed from the ground up by Cisco specifically for the wireless environment. This protocol allows RAPs to communicate with each other to determine the best path back to the wired network via the RAP. Once the optimal path is established, AWPP continues to run in the background to establish alternative routes back to the RAP just in case the topology changes or conditions cause the link strength to weaken. This protocol takes into consideration things like interference and characteristics of the specific radio so that the mesh can be self-configuring and self-healing. AWPP actually has the ability to consider all relevant elements of the wireless environment so that the mesh network’s functionality isn’t disrupted and can provide consistent coverage.