Then we might use a 10-gig Ethernet connection for the switch to switch backbone connections as it is going to aggregate even more traffic in the backbone. We can also use etherchannel, which allows us to combine a few low-speed links into a logical high-speed link, which will allow us to increase the bandwidth capability through load balancing internally within the etherchannel link as well as providing redundancy because the etherchannel will load balance across available links. So, should there be an outage on one of the channelized link, the load balance mechanism simply load balance with the existing links. To determine how much bandwidth we need for each link, we simply look at total amount of traffic that will flow through that link. That will give us an estimate of how much bandwidth we need.

When connecting multiple switches together, we would like to use multiple links to connect the multiple switches together, thereby creating a redundant infrastructure, which eliminates a single point of failure. But this redundant topology causes a host of feedback loop-associated problems for the switch, ranging from broadcast storm to multiple framed copies as well as MAC address database instability problems.

Here's a quick review of how a switch handles broadcast frames.

In this example, host X sends a unicast frame to router Y and the router Y MAC address has not been learned by either switches.

So, switch A and switch B will learn the MAC address of host X is associated with port 1. And because the router Y MAC address is not learned yet, the switch will flood the frame to all ports. In this case, you'll flood through port 2 except port 1. Switch A and switch B will then receive this data frame via port 2, and they will think that MAC address of host X is now associated with port 2. Now in short, the reason why we have MAC address database instability is because the switch does not know how to distinguish between a direct data frame versus an indirect data frames that came through another search. So, that's why it gets confused.

How does STP works

In a spanning tree environment, you can only have one root bridge per switching broadcast domain; that would be equivalent to the idea of one hub for the hub and spoke deployment. You can only have one root port per nonroot bridge. The nonroot bridge will find one best path to the root, and the best path to the root is call root port. And one designated port per segment and non designated ports are blocked and unused.

How does the switch elect a root bridge in the switching networks? Every two seconds the switches will advertise BPDU (Bridge Protocol Data Unit) to each other. The BPDU can be the switch resume that they use for root election. Inside the BPDU, there are many parameters, but the two important parameters that are used for root election is the bridge ID and the root bridge. The root bridge or the root ID is the root device name in terms of MAC address. The bridge ID is this current device priority and MAC address. The bridge priority by default is 32768 for all switches. The reason why the default priority for all switches is 32768 in the spanning tree protocol is because the bridge priority is 16 bits long, which can have a maximum number range of 65536. The middle number for this range is 32768 - not too high, not too low, right in the middle. So the middle range is 32768.

Switches advertises BPDUs every 2 seconds. During the first BPDU advertisement, every switch would advertise their bridge ID as themselves and their root bridge or the root ID as themselves too. It is upon talking, communicating with other switches, that they start learning other switches existence and slowly would elect the right switch to become the root ID. In the spanning tree protocol environment, the more desired switch would have a smaller priority or a smaller MAC address. Smaller is preferred in the spanning tree protocol. If a switch has a smaller priority, regardless of whether it has a bigger or smaller MAC address, priority overrides MAC address.

After the spanning tree protocol has elected the root, the second step is for the nonroot bridge to find the best path to the root. Let's start with a simple scenario on the left.

Spanning tree protocol has a cost table that will convert the bandwidth link into the respective link cost so that the nonroot bridge can use this link cost information to find the cheapest path to the root. 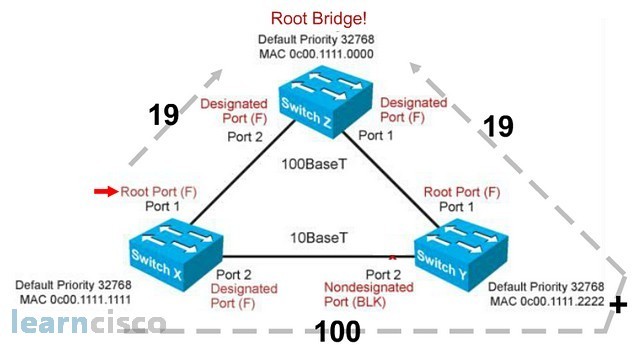 So, in this scenario, the nonroot bridge switch X has two viable paths to the root Z. It can use port 1 path or port 2 path via switch Y. By converting the bandwidth link into the appropriate costing, we can see that, if switch X were to use the port 1 path, it will cost switch X 19 cost, whereas if switch X were to use port 2 to go to the root Z, it would require 100 followed by a cost of 19, with a total of 119 cost. Switch X would then choose the lower costing to go to the root bridge. As such, switch X will elect port 1 as the root port.

Spanning tree protocol, so far, through use of BPDU, has elected switch Z as the root bridge. And by using the idea of converting bandwidth link into link cost, the nonroot bridge devices, switch X and switch Y, determined that the best path to the root with the lowest cost is port 1. Therefore, port 1 on both switches are the root port. The link between switch X and switch Y via port 2 is the non-best path link, and it has to be disabled. Now, it turns out that we only need to disable one port in order to disable the entire link. So, should switch X, port 2 be blocked or switch Y, port 2 be blocked?

In case of a cross cable connecting the same switch back to itself the higher port number will be blocked!

Whenever a switch port is enabled and connected, the switch spanning tree protocol goes through the listening and learning phases to ensure that there is no switching loop, and learns the MAC address for that switch to do data forwarding. Unfortunately, the spanning tree protocol is very naïve and checks any ports that is enabled and connected. When we connect an end-user device to the switch, which is a non-switch device, the spanning tree protocol will still take about 30 seconds to listen to any BPDUs on the port as well as learning the MAC address on the port before turning the port green to allow data to be forwarded through the port. This causes problems, as some user applications need connectivity to the network in less than 30 seconds. A well-known example was Novell clients, which needs to connect to the Novell servers in 15 seconds. It causes a lot of problems for Novell users in a switching environment. To address the problem, Cisco introduced the idea of PortFast whereby end-user ports can be manually configured to go directly to forwarding mode, bypassing the listening and learning phase. 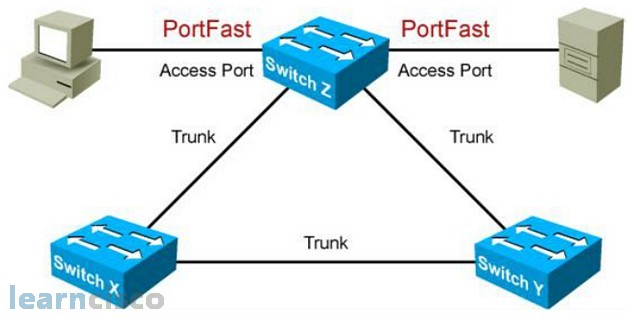 The way spanning tree protocol ensures a loop-free switching environment is to make sure that there is only one link between switches, and that all the switches go through the root switch. So, should you put extra physical links between the switches, those extra links would simply be disabled and not used. But, with the use of etherchannel, we can bundle or aggregate all these physical links into one logical connection, and this can fool spanning tree protocol into thinking that all these physical links are one logical link. As such, it does not proceed to disable those extra physical links. With the extra links enabled, etherchannel allows us to create a high-speed connection between the switches, where we can load balance data traffic across multiple links. Etherchannel also provides redundancy because the etherchannel mechanism would load balance across any available links. So, if you have one physical link being disabled for whatever reason, etherchannel simply load balances across the existing links.

802.1Q, on the other hand, uses native VLAN to send BPDUs. So, all switches can see each other's BPDU regardless of their VLAN distinction, resulting in a giant single spanning tree calculation for the entire switching network regardless of VLAN. We called this common spanning tree protocol.

Per VLAN Spanning-Tree Plus (PVST+)

So, PVST is a more desirable solution. But unfortunately, PVST is implemented in Cisco proprietary ISL trunking solutions. IEEE 802.1Q practices common spanning tree solution, so what Cisco did was Cisco incorporated PVST concepts into the IEEE 802.1Q solution, resulting in PVST+.

So, the idea of PVST+ is to enable a non-PVST environment, such as IEEE 802.1Q, to implement a PVST concept. So, while Cisco enhanced 802.1Q with PVST, it still has to maintain backward compatibility with IEEE 802.1Q, which uses common spanning tree methods. To do so, Cisco runs both PVST+ and CST in an 802.1Q environment. When talking to other Cisco switches, it will send VLAN tagging BPDUs to facilitate PVST+ performance. While talking to non-Cisco switches, it will send native VLAN BPDUs to those switches.