Networks and networking have grown exponentially over the last 15 years. They’ve had to evolve at light speed just to keep up with huge increases in basic missioncritical user needs such as sharing data and printers, as well as more advanced demands such as voice and video conferencing. Unless everyone who needs to share network resources is located in the same office area (an increasingly uncommon situation), the challenge is to connect sometimes many relevant networks together so all users can share the network resources.

It’s also likely that at some point, you’ll have to break up one large network into a number of smaller ones because user response has decresed to a trickle as the network grew and grew and LAN traffic congestion reached overwhelming proportions. Breaking up a larger network into a number of smaller ones is called network segmentation, and it’s accomplished using routers, switches, and bridges. Possible causes of LAN traffic congestion are:

Routers are used to connect networks together and route packets of data from one network to another. Cisco became the de facto standard of routers because of their high-quality router products, great selection, and fantastic service. Routers, by default, break up a broadcast domain, which is the set of all devices on a network segment that hear all broadcasts sent on that segment. Breaking up a broadcast domain is important because when a host or server sends a network broadcast, every device on the network must read and process that broadcast-unless you’ve got a router. When the router’s interface receives this broadcast, it can respond by basically saying “Thanks, but no thanks,” and discard the broadcast without forwarding it on to other networks. Even though routers are known for breaking up broadcast domains by default, it’s important to remember that they break up collision domains as well. Two advantages of using routers in your network are:

Four router functions in your network can be listed as:

Switches aren’t used to create internetworks, they’re employed to add functionality to an internetwork LAN. The main purpose of a switch is to make a LAN work better-to optimize its performance-providing more bandwidth for the LAN’s users. And switches don’t forward packets to other networks as routers do. Instead, they only “switch” frames from one port to another within the switched network.

Unlike layer 2 switches that forward or filter frames, routers (layer 3 switches) use logical addressing and provide what is called packet switching. Routers can also provide packet filtering by using access-lists (discussed later), and when routers connect two or more networks together and use logical addressing (IP), this is called an internetwork. Lastly, routers use a routing table (map of the internetwork) to make path selections and to forward packets to remote networks. 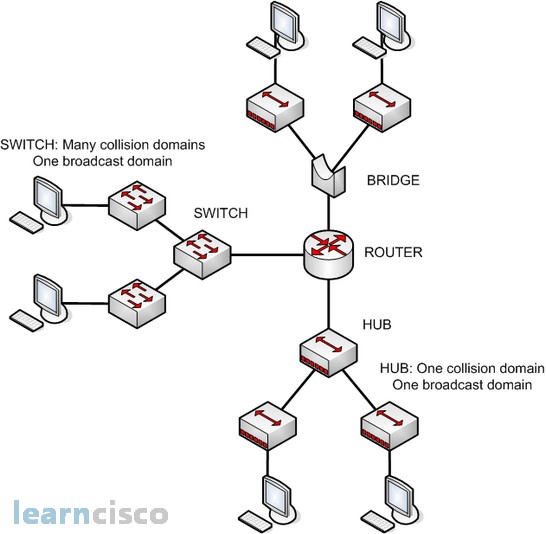 Notice that the router is found at center stage, and that it connects each physical network together! The best network connected to the router is the LAN switch network on the left, because each port on that switch breaks up collision domains. But it’s not all good-all devices are still in the same broadcast domain. If your broadcast domains are too large, the users have less bandwidth and are required to process more broadcasts, and network response time will slow to a level that could cause office riots.

Obviously, the best network is one that’s correctly configured to meet the business requirements of the company it serves. LAN switches with routers, correctly placed in the network, are the best network design. This book will help you understand the basics of routers and switches so you can make tight, informed decisions on a case-by-case basis.