In this lesson we will describe and classify the different available protocols and then focus on the routing information protocol (RIP) to provide configuration examples on Cisco routers. We will also describe the use of monitoring and troubleshooting tools available in IOS.

What is a Routing Protocol?

Routing protocols define the rules for the dynamic exchange of information between routers to build the routing table for a routed protocol. The routed protocol will then use that information to drive the packets and find the best path to a destination. So the routing protocols are like the builders of a map to a city and then the routed protocol is the one driving the packets using the information from the map to go around the city. The analogy is complete if you think of the builders of the map adjusting continuously to changes in terms of new streets, streets that may be blocked or no longer available.

In the TCP/IP protocol stack, the routed protocol is IP and the routing protocols abound; RIP and EIGRP are examples of that. Now different routing protocols will be more accurate in maintaining the topology information and learning about changes. Some others will be more efficient in doing so and will adjust quickly to topology changes. In comparing, routing protocols will use three major criteria: first, how routers discover each other and start exchanging routing information; second, how they learn about the network; and third, how they adjust to network changes and how quickly they recover and find the alternative path.

The concepts of IGPs and EGPs tell you a bit about how the routing protocols work. Typically, EGPs are more scalable to be able to process Internet routes, so they are geared toward high volumes and millions of routes. The IGPs will be geared toward the thousands of routes and perhaps thinking about convergence times and not so much about scalability.

Another way to classify routing protocols is by looking at these categories: 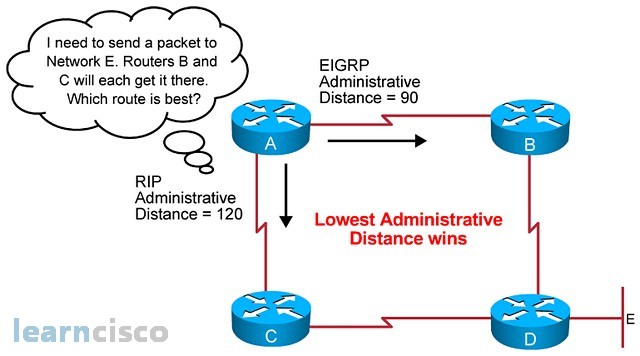 Another important classification that will tell you a lot about how routing protocols operate is whether they are classful or classless routing protocols. The main difference is the way they operate in the presence of subnet masks. A classful routing protocol will not include the subnet mask along with the route advertisement. This means that they do not support VLSM or Variable Length Subnet Masks.

The drawbacks of this method are critical. You will not be able to use multiple sizes of subnet masks; therefore, the IP address designed in allocation is less flexible. You will also not be able to summarize the routing advertisements and that has an impact on the routing table size and router performance. RIP version 1 and IGRP are both classful routing protocols.

Protocols like RIPv2, EIGRP, OSPF, IS-IS are classless routing protocols and this means that they will advertise the subnet mask along with the prefix of the destinations that are trying to advertise. This means that you can have an environment with multiple subnet mask sizes; this is called VLSM or Variable Length Subnet Masks. IP address allocation and assignment is a lot more flexible, for example, you can think of a /30 mask for a point-to-point link because the /30 will result in only two IP addresses, that is very efficient. You are not wasting IP addresses in such a small subnet.

Also, summary routes can be manually controlled within the network and that allows for more control over routing table sizes and a more stable routing process. This is because route summarization is the process of advertising fewer routes by sending summaries of blocks of networks. This is accomplished by sending prefixes with smaller masks. It would be similar to simply sending a map advertising the way or the road to the city without the specifics of the streets and areas of the city. This not only makes for a more simple map, but it is also more stable because if a street of the city is blocked, the map to the city will not change.