In the late 1970s, the Open Systems Interconnection (OSI) reference model was created by the International Organization for Standardization (ISO) to break this barrier. The OSI model was meant to help vendors create interoperable network devices and software in the form of protocols so that different vendor networks could work with each other.

A reference model is a conceptual blueprint of how communications should take place. It addresses all the processes required for effective communication and divides these processes into logical groupings called layers. When a communication system is designed in this manner, it’s known as layered architecture.

The OSI model is hierarchical, and the same benefits and advantages can apply to any layered model. The primary purpose of all such models, especially the OSI model, is to allow different vendors’ networks to interoperate. Advantages of using the OSI layered model include, but are not limited to, the following:

The OSI has seven different layers, divided into two groups. The top three layers define how the applications within the end stations will communicate with each other and with users. The bottom four layers define how data is transmitted end-to-end. Here are all of the layers and their functions. 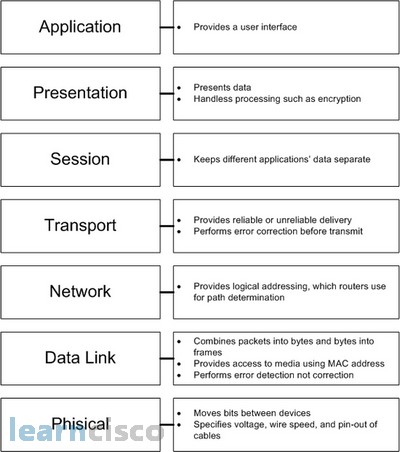