Ethernet is the protocol of choice in local area networks. A local area network is simply a group of devices interconnected and located relatively close together in a limited area. However, there are three factors that identify LANs as opposed to wide area networks, or WANs. First, yes, physical proximity, with a smaller geographic scope, but secondly, the resources to run at high speed data rates. Bandwidth is abundant, and it typically goes anywhere from 100 Mb/s to the 1 Gb/s and 10 Gb/s that we see in today’s networks. Third, and perhaps most important, is that they do not need a lease line, or a telecom provider, or service provider in order to interconnect the devices. A LAN can be as small as a simple office, or even a teleworker’s home office, and from there to a full campus with multiple buildings and fiber connections between the buildings.

Typical components: the endpoints, PCs, servers, IP phones, video, consoles, and so on, but also the network devices that provide an aggregated place to interconnect like a switch, routers to interconnect different networks within the same LAN, and sometimes the more traditional hubs as shared media. The network interface cards and the cabling are also part of the LAN. We are seeing more and more, again, the 1 Gb/s or 10 Gb/s connections even to servers and PCs. In terms of protocols, again, Ethernet is the one that rules layer 2. IP is the ruler of layer 3, and within IP you will see ARP routing protocols and protocols like DHCP to streamline and automate the allocation and assignment of IP addresses.

The LAN is there as a traditional environment for users to connect to the network and share resources in the form of data, applications, and other functions. Input and output devices like cameras, teleconferencing, and printers will also be there. In today’s networks, one of the most important functions is that of providing communications to other networks. And so, through default gateways and through routers and WAN edge devices, one of the main purposes of the LAN is to serve as the entry point into a global network that provides a multitude of resources and connectivity with peers, suppliers, clients, and competitors.

Today’s local area networks can be as small as a small office or home office, couple of devices with Internet connection, or a full campus interconnecting multiple buildings and thousands of users. Today’s teleworker network and mobile users are seen as an extension of the enterprise LAN through the use of virtual private networks. In fact, one of the objectives of those VPNs or virtual private networks is to provide transparent access into the LAN, in a scenario in which the user experience and their use of the network is going to be very similar, if not the same, as if they were directly connected to the enterprise LAN.

As a LAN protocol, Ethernet was created in the 70s by DEC, Intel, and Xerox. In fact, it was called DIX Ethernet. It was later called thick Ethernet because of the use of coaxial cable. In the mid 80s, it was upgraded to support more capabilities and speeds. This was called Ethernet 2, and around the same time, IEEE was creating standards for Ethernet-like networks; these were called 802.3. Throughout the years, we have seen now Ethernet has evolved into 10 Mb/s, 100 Mb/s, and later 1 Gb/s, and today’s 10 Gb/s in the form of IEEE standard 802.3AE.

If you look at Ethernet from the perspective of OSI, we will see that it belongs to data link layer but also has specifications at the physical layer. If you look at the various flavors, like IEEE 802.3U, which is Fast Ethernet; .3Z, which is 1 Gb Ethernet; and 3AB, which is 10 Gb Ethernet, you will see that the specification at the physical layers there, and the references to fiber technologies and fiber connectors to provide the higher speeds is going to be there. The protocol is split into two sublayers. The media access control sublayer will deal with access to the media and define the MAC addresses as forms of identification for all devices in an Ethernet network. The logical link control sublayer will deal with interaction with upper layers. And so, as Ethernet components process each packet, they will make references to, for example, IP at upper layers by using the fields in the frame header. 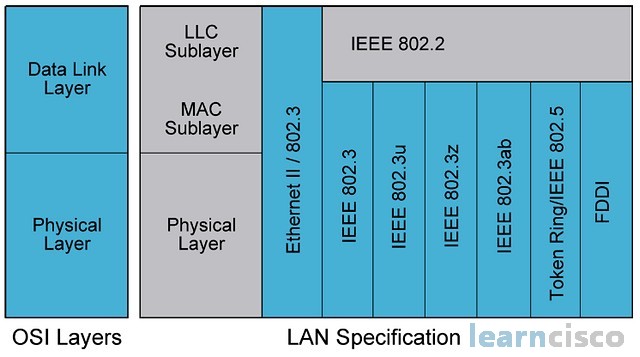 At this point, we know that Ethernet is a layer 2 protocol, which provides among other things addressing to a MAC address but also an access method. The access method is actually called CSMA/CD or Carrier Sense Multiple Access / Collision Detection. This is a fair method, which through the magic of technology works for Ethernet, but it may be chaotic for human interaction in say a business context, in a business meeting, for example. This is because it is very fair and it allows all machines to transmit signals at the same time, at all times, or at any time and with no priorities there is a well everybody has equal access to the channel. That is the multiple access part of the protocol.

This results though in a good likelihood of two machines trying to transmit at the same time, and this would create a collision. However, in Ethernet technologies, all machines can sense the channel and determine whether there are signals from other transmitters. And this is the carrier sens part of the protocol. This allows machines to sense the channel and detect collisions, which makes it a collision detection part of the protocol.

How does it work then? Well, when machines detect collisions, they will back off and reschedule transmission according to a random timer, which is going to be different per machine eventually. This increases the likelihood of machines trying to retransmit at the same time again. That’s how it works and creates a fair environment, which in the long run should also be an environment with good performance. Some things could gowrong, usually with poor design, for example, a large collision domain with too many machines sharing the same channel. This is going to increase the likelihood of machines transmitting the same time, and it is going to increase the likelihood of collisions, which in turn decreases or degrades performance. Other problems are related to malfunctioning hardware, which could be sending error frames and gibberish to the network, causing confusion with the other machines and causing frame errors and network errors. 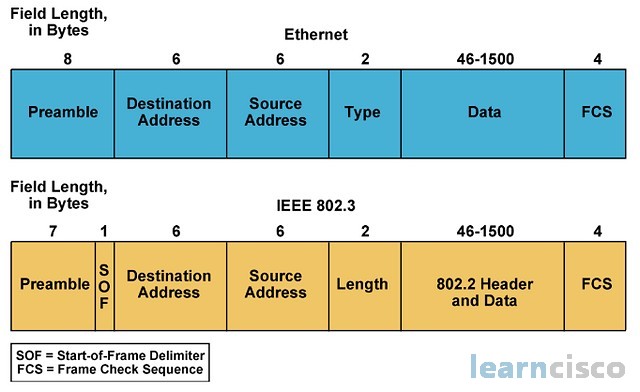 Another important function of any layer 2 protocol is framing. The frame is the container that will carry the bits that need to be transmitted on the network and includes a format of fields that will make sense out of those bits. The figure illustrates the frame format for both Ethernet 2 and the standard IEEE 802.3. Both contain a permeable, which is a series of bits that are used to synchronize the two communicating devices, and a frame-check sequence, which is used for integrity, also destination addressess and source addresses. These would be MAC addresses. The differences are clear. The 802.3 frame will have a start frame delimiter, which signals the receiving device that the actual frame transmission is about to start. Also look at that field; the type field in Ethernet 2 is a reference to upper layer protocols. The same bits are used as a length field in 802.3 and signal the length of the data field. That data field will contain the 802.2 header, which is the implementation of the logical link control sublayer. You will find the upper layer protocol information on that header.

Communicating Within the LAN

Another important concept in Ethernet and LAN communications is the scope of a certain transmission. In a unicast transmission, there is only one destination, and so there will be a destination address that will represent a single machine. This is the most typical approach in local area networks, and the MAC address are that unique identifier that is used to send unicast frames. Some protocols and applications will need to send frames to all devices in the LAN, and that is why you use a broadcast. Broadcast is simply a destination that will be processed by all devices. This comes in handy to protocols like ARP, which need to request translation of an IP address to a MAC address, but simply do not know who is the owner of the IP address. Well, they will simply broadcast that request that all machines are able to process, and the corresponding machine will be able to reply. Finally, multicast is right in the middle between unicast and broadcast. It is not a single destination or all destinations, it is a group. In other words, machines would need to belong to a group, and then a certain transmission or packet would be destined to that group. It is a lot more dynamic because machines can join groups and leave groups dynamically. An example of multicast application: video conferencing, e-learning, and some other multimedia. 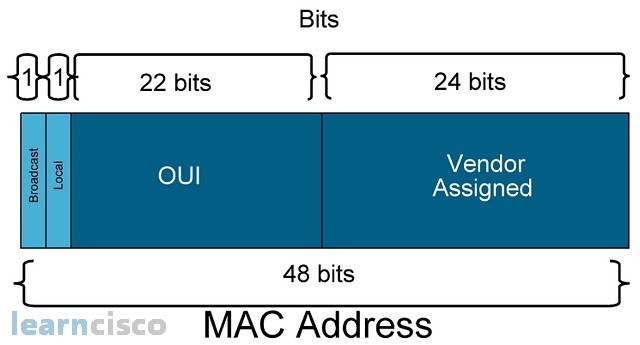 Another function of any layer 2 protocol is addressing. Ethernet is no exception, and the media access control address is that unique identifier that is used by all machines and devices in an Ethernet network. MAC addresses are typically associated to the vendor of the hardware. In fact, IEEE defines ranges for different vendors to guarantee uniqueness. Some vendors may allow the modification of MAC addresses for certain purposes. The MAC address has two major components: a 24-bit Organizational Unique Identifier, or OUI, which identifies the manufacturer of the hardware, whether it is a network interface card, or router ports, etc. Within those 24-bits, there are 2 bits that have special significance. The broadcast bit can be used to indicate that the address is a broadcast or a multicast address. The locally administered address bit is typically used when the MAC address is changed. The second half of the MAC address is the 24-bit and station address, which is regulated and administrated by the specific vendor of the hardware. The requirement is for it to be unique.