Open Shortest Path First (OSPF) is an open standard routing protocol that’s been implemented by a wide variety of network vendors, including Cisco. If you have routers from different vendors then you can’t use EIGRP. So your remaining CCNA objective options are basically RIP, RIPv2, and OSPF. If it’s a large network, then, really, your only options are OSPF and something called route redistribution-a translation service between routing protocols that we discussed earlier in this chapter.

OSPF works by using the Dijkstra algorithm. First, a shortest path tree is constructed, and then the routing table is populated with the resulting best paths. OSPF converges quickly, although perhaps not as quickly as EIGRP, and it supports multiple, equal-cost routes to the same destination. Like EIGRP, it does support both IP and IPv6 routed protocols.

OSPF is the first link-state routing protocol that most people are introduced to, so it’s useful to see how it compares to more traditional distance-vector protocols such as RIPv2 and RIPv1.

OSPF has many features beyond the few that are listed in the table, and all of them contribute to a fast, scalable, and robust protocol that can be actively deployed in thousands of production networks. OSPF is supposed to be designed in a hierarchical fashion, which basically means that you can separate the larger internetwork into smaller internetworks called areas. This is the best design for OSPF.

The following are reasons for creating OSPF in a hierarchical design:

This does not make configuring OSPF easier, but more elaborate and difficult. The picture below shows a typical OSPF simple design. Notice how each router connects to the backbone- called area 0, or the backbone area. OSPF must have an area 0, and all other areas should connect to this area. Routers that connect other areas to the backbone area within an AS are called Area Border Routers (ABRs). Still, at least one interface of the ABR must be in area 0. 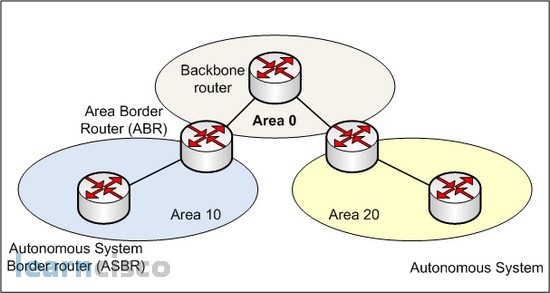 OSPF runs inside an autonomous system, but it can also connect multiple autonomous systems together. The router that connects these ASes is called an Autonomous System Boundary Router (ASBR). Ideally, you would create other areas of networks to help keep route updates to a minimum and to keep problems from propagating throughout the network.

The following are important OSPF terms to familiarize yourself with before you proceed:

Within an area, each router calculates the best/shortest path to every network in that same area. This calculation is based upon the information collected in the topology database and an algorithm called shortest path first (SPF). Picture each router in an area constructing a tree- much like a family tree-where the router is the root and all other networks are arranged along the branches and leaves. This is the shortest path tree used by the router to insert routes into the routing table. It’s important to understand that this tree contains only networks that exist in the same area as the router itself does. If a router has interfaces in multiple areas, then separate trees will be constructed for each area. One of the key criteria considered during the route selection process of the SPF algorithm is the metric or cost of each potential path to a network. But this SPF calculation doesn’t apply to routes from other areas.

OSPF uses a metric referred to as cost. A cost is associated with every outgoing interface included in an SPF tree. The cost of the entire path is the sum of the costs of the outgoing interfaces along the path. Because cost is an arbitrary value as defined in RFC 2338, Cisco had to implement its own method of calculating the cost for each OSPF-enabled interface. Cisco uses a simple equation of 108/bandwidth. The bandwidth is the configured bandwidth for the interface. Using this rule, a 100Mbps Fast Ethernet interface would have a default OSPF cost of 1 and a 10Mbps Ethernet interface would have a cost of 10. This value may be overridden by using the ip ospf cost command. The cost is manipulated by changing the value to a number within the range of 1 to 65 535. Because the cost is assigned to each link, the value must be changed on the interface that you want to change the cost.