Unlike bridges that use software to create and manage a filter table, switches use application specific integrated circuits (ASICs) to build and maintain their filter tables. But it’s still okay to think of a layer 2 switch as a multiport bridge because their basic reason for being is the same: to break up collision domains. Layer 2 switches and bridges are faster than routers because they don’t take up time looking at the Network layer header information. Instead, they look at the frame’s hardware addresses before deciding to either forward the frame or drop it.

Switches create private dedicated collision domains and provide independent bandwidth on each port, unlike hubs. The following picture shows five hosts connected to a switch-all running 100Mbps halfduplex to the server. Unlike a hub, each host has 100Mbps dedicated communication to the server. 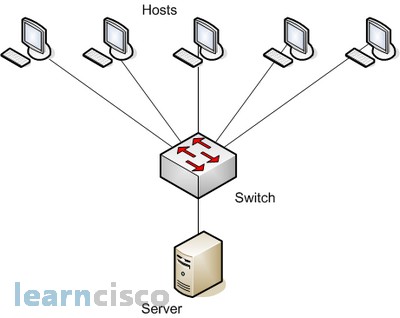 What makes layer 2 switching so efficient is that no modification to the data packet takes place. The device only reads the frame encapsulating the packet, which makes the switching process considerably faster and less error-prone than routing processes are. And if you use layer 2 switching for both workgroup connectivity and network segmentation (breaking up collision domains), you can create a flatter network design with more network segments than you can with traditional routed networks. Plus, layer 2 switching increases bandwidth for each user because, again, each connection (interface) into the switch is its own collision domain. This feature makes it possible for you to connect multiple devices to each interface.

Since we commonly stick layer 2 switching into the same category as bridged networks, we also tend to think it has the same hang-ups and issues that bridged networks do. Keep in mind that bridges are good and helpful things if we design the network correctly, keeping their features as well as their limitations in mind. And to design well with bridges, the two most important considerations are:

Bridged networks break up collision domains, but network is still one large broadcast domain. Neither layer 2 switches nor bridges break up broadcast domains by default- something that not only limits your network’s size and growth potential, but can also reduce its overall performance. Broadcasts and multicasts, along with the slow convergence time of spanning trees, can give you some major grief as your network grows. These are the big reasons why layer 2 switches and bridges cannot completely replace routers (layer 3 devices) in the internetwork.

With these reminders of the three types of Ethernet MAC addresses, you can appreciate the logic used by a LAN switch. A switch listens for frames that enter all its interfaces. After receiving a frame, about a switch decides whether to forward a frame and, if so, out which port(s). Switches basically perform three tasks:

The third task, loop prevention, is performed using STP, which is covered in depth in the next chapter.