Switches reduce network overhead by forwarding traffic from one segment to another only when necessary. To decide whether to forward a frame, the switch uses a dynamically built table called a bridge table or MAC address table. The switch examines the address table to decide whether it should forward a frame. For example, consider the simple network shown below. Fred first sends a frame to Wilma and then one to Barney. 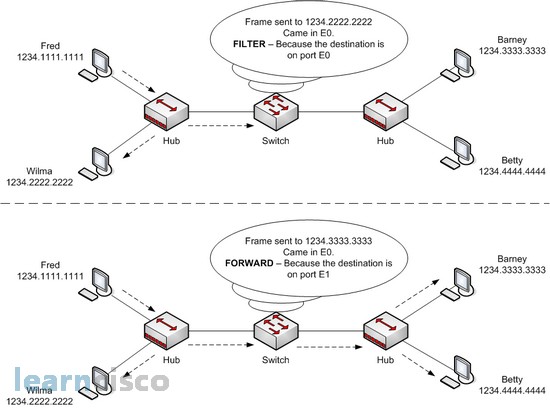 The switch decides to filter (in other words, to not forward) the frame that Fred sends to Wilma. Fred sends a frame with a destination MAC address of 1234.2222.2222, which is Wilma’s MAC address. The switch overhears the frame, because it is attached to the left Hub. The switch then decides what common sense tells you from looking at the figure-it should not forward the frame, because Wilma, attached to the same Hub as well, already has received the frame. (Hubs simply repeat the signal out all ports, for all frames, so the switch receives everything sent by either Barney or Fred.) But how does the switch know to not forward the frame? The switch decides to filter the frame because it received the frame on port E0, and it knows that Wilma’s MAC is also located out E0.

Conversely, the switch decides to forward the frame that Fred sends to Barney in the bottom part of the figure. The frame enters the switch’s E0 interface, and the switch knows that the destination address, 1234.3333.3333, is located somewhere out its E1 interface. So the switch forwards the frame.

Bridges forward LAN broadcast frames, and unknown unicast frames, out all ports. LAN broadcasts, by definition, are received by all devices on the same LAN. So the switch simply forwards broadcasts out all ports, except the one on which the broadcast was received. Switches forward unknown unicast frames, which are frames whose destination MAC addresses are not yet in the bridging table, out all ports as well. The switch floods the frame with the hope that the unknown device will be on some other Ethernet segment, it will reply, and the switch will build a correct entry in the address table.
Generally speaking, switches also forward LAN multicast frames out all ports, just like they do for broadcasts. However, a few multicast features in switches limit the flooding of multicasts, such as Internet Group Management Protocol (IGMP) snooping.

The following list provides a quick review of the basic logic a switch uses: