The following figure shows the PDUs and how they attach control information to each layer. This figure demonstrates how the upper-layer user data is converted for transmission on the network. The data stream is then handed down to the Transport layer, which sets up a virtual circuit to the receiving device by sending over a synch packet. Next, the data stream is broken up into smaller pieces, and a Transport layer header (a PDU) is created and attached to the header of the data field; now the piece of data is called a segment. Each segment is sequenced so the data stream can be put back together on the receiving side exactly as it was transmitted. 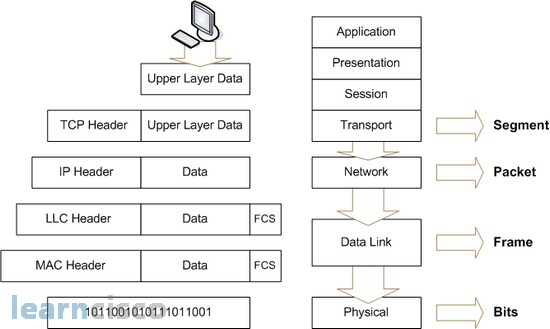 Each segment is then handed to the Network layer for network addressing and routing through the internetwork. Logical addressing (for example, IP) is used to get each segment to the correct network. The Network layer protocol adds a control header to the segment handed down from the Transport layer, and what we have now is called a packet or datagram. Remember that the Transport and Network layers work together to rebuild a data stream on a receiving host, but it’s not part of their work to place their PDUs on a local network segment-which is the only way to get the information to a router or host.

To put this frame on the network, it must first be put into a digital signal. Since a frame is really a logical group of 1s and 0s, the Physical layer is responsible for encoding these digits into a digital signal, which is read by devices on the same local network. The receiving devices will synchronize on the digital signal and extract (decode) the 1s and 0s from the digital signal. At this point the devices build the frames, run a CRC, and then check their answer against the answer in the frame’s FCS field. If it matches, the packet is pulled from the frame, and what’s left of the frame is discarded. This process is called de-encapsulation. The packet is handed to the Network layer, where the address is checked. If the address matches, the segment is pulled from the packet, and what’s left of the packet is discarded. The segment is processed at the Transport layer, which rebuilds the data stream and acknowledges to the transmitting station that it received each piece. It then happily hands the data stream to the upper-layer application.

Once the Transport layer header information is added to the piece of data, it becomes a segment and is handed down to the Network layer, along with the destination IP address.

The packet, along with the destination hardware address of either the local host or default gateway, is then handed down to the Data Link layer. The Data Link layer will add a header to the front of the packet and the piece of data then becomes a frame. This is shown below.

The frame uses an Ether-Type field to describe which protocol the packet came from at the Network layer. Now, a cyclic redundancy check (CRC) is run on the frame, and the answer to the CRC is placed in the Frame Check Sequence field found in the trailer of the frame. The Frame is now ready to be handed down, one bit at a time, to the Physical layer, which will use bit timing rules to encode the data in a digital signal. Every device on the network segment will synchronize with the clock and extract the 1s and 0s from the digital signal and build a frame. After the frame is rebuilt, a CRC is run to make sure the frame is OK. If everything turns out to be all good, the hosts will check the destination address to see if the frame is for them.