Well let's look at this boot sequence, not so we can memorize it, it's not why we're doing this, but so we understand what's happening here with our router. ROM is utilized first as we can see, perform our power-on self test, or POST, make sure the hardware is there, make sure they're functioning properly, load the microcode, the code that is necessary to find the various features we need, such as our IOS image and our configuration file. 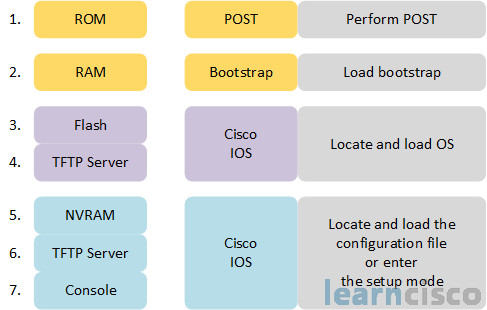 There's a broadcast mechanism, in fact, where we'll shout and say, "Hey, any TFTP servers out there? I need some help." I don't like to use that, it's actually pretty tricky to set up, but it, technically, is a feature that we can do. And then once we might not have loaded the startup-config and not found anything else. Let me ask you, what happens if no startup configuration could be obtained? What happens?

I'll challenge that. Is there any other reason why we might see the setup script or not be able to load the startup-config on a router chassis?

Okay. So we're kind of priming you for something we're going to talk about momentarily and that is, there's this value that, in fact, can override this behavior. You can tell it, in fact, to go straight to things like ROM monitor, or ROMMON, or you could tell it, "Hey, don't even load a startup-config." Let's learn a little bit more about this thing called the configuration register value.

Well hexadecimal is base 16 and there are ways of representing what number system we're talking about. 0B is binary, 0D is decimal. I don't know if 0O exists, but that would be octal. So the 0x says hexadecimal. Here is just a little word of caution, when you manipulate this value, you have to be mindful of the fact that you do want to preface it with the 0x. I had a friend who turned to be a CCIE, but he made a mistake one day that he really paid for and that was, he changed this value. Let's say he was changing it to the default, but all he did is he said, 2102. But he didn't put in the 0x, easy mistake, right? Well the problem is, he put it in as 2102 decimal, who the heck knows what the interpretation of that is? And he locked himself out of the console until he figured out the speed of the console port that was enforced by the change that he made erroneously, accidentally. So don't make that same mistake, okay. Put in the 0x if you ever manipulate this value.

So what is our focus on here? Our focus will be around the last two hexadecimal values. So we're referring to the last two, we're not counting 0x here, right? Well we said, it's 4 hexadecimal values. So in this example, 2102, each one of those. And the final two, the last 2 will be our focus. For here right now, let's just focus on the very last value, the 2 at the end. What is that? What does it represent? Well this is known as the boot field, the boot field. So I want you to guess right now as to what we could manipulate by changing this last value in the configuration register? If you guess that we could manipulate how the device boots, it's exactly what we can do. Now let's understand here, there is a default value for the configuration register and we're looking at it right now, 2102 that's the default, that's what we expect under normal operating conditions. So, the boot field of 2 at the very end, if I see 2, what does that mean?

It means the default. And the default is, the router is going to boot up, it loads the bootstrap, and then it's going to say, "Hey, do you want to tell me where my operating system is?" And the way that we tell the operating system location to a router is, we use what is called a boot system command. boot system command done from global configuration mode says, "Hey I'm going to tell you exactly where it is." And you could point to it. Now we don't have those by default. But if one exists, it's going to tell us explicitly where to attempt to load the operating system from and I think that makes sense. So 2 is a pretty good default for us.

What if I had a value of 8 in the last field? What does that mean?

And so 2 is the default, but if you saw F or anything else it means the same thing. What about 1, what if we change that to 1? Well, remember, 2 through F states look in NVRAM for that boot system command and use it. If we have multiple boot system commands, it's going to use the first one it finds. So it looks through it sequentially. Now if I have a 1, how is that going to change the behavior of the boot?

What about the third one here, the 0?

Password recovery and IOS recovery. So it's the recovery place. It may not be fun, it may be the scary place, but I find myself there from time to time. And remember, how we began this journey together for management? We want you to have confidence in the chassis, we want you to understand how to work with the chassis. And knowing this value and knowing how to work in ROM monitor mode, can really help you out.

So how do we verify the current configuration register value? show version, go right to the bottom of the output, you'll see it listed right there.

But how do we change it? We change it in global configuration mode with the command config register.

Notice the 0x in front of the value we're specifying. Don't make the mistakes that others have done in the past. 0x for hex and then 2101. Now folks, we made that change and we affected the boot field that's what we've affected. So is it going to change anything right now? No it just changed the configuration register value, it doesn't take effect until the next reload, right? Because that's where we're going to boot again. But we can see here, that the next time we load, we're going 2101. So what does that mean? The boot field is 1, what will happen?