In this poorly designed network, all departments belong to the same network domain, so what happens in one department can overflow and affect the rest of the departments. 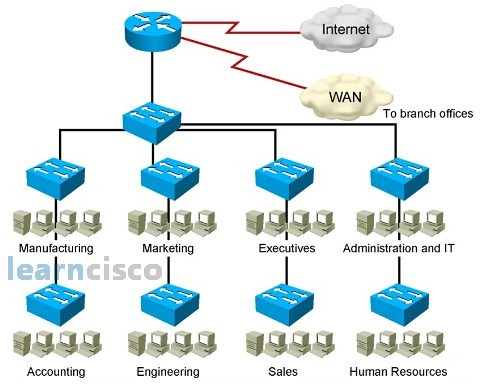 Because all the departments are in a single domain, it creates a large broadcast domain resulting in every department receiving each other's broadcast. Also, there will be a large amount of unknown MAC addresses, and when a switch does not know how to handle a specific MAC address, it will flood to all the ports. Likewise, when the switch receives multicast traffic from different departments, it will be treated like a broadcast and flooded to all departmental ports. This excessive flooding of data traffic to every departmental port creates a management problem for the network administrator as well as making it difficult to troubleshoot the network. As the signals are heard by every other department, it also poses a security problem, too.

One of the main problems of the poorly designed network is due to excessive flooding to every departmental port. One way to separate every department broadcast signal is to have them in separate physical switches, but switches are expensive to buy, so network engineers came up with the idea of being able to separate the department broadcast signals using a logical method. The logical method allows the physical switch to be logically divided into logical segments. Each logical segment is called a virtual LAN, or VLAN for short. The objective of the VLAN is to separate each department's broadcast signals. The VLAN gives us the ability to segment our switch into logical divisions. When dividing the switch into logical partitions, we have the flexibility to group appropriate users to the same VLANs. Although the objective of the VLAN is to separate each department's broadcast signals, but the division is so complete that all signals, be it the unicast or broadcast signals, are isolated within each VLAN, and we consider this full isolation a security advantage.

A VLAN allows the network administrator to partition the network into departmental VLANs. But for inter-VLAN communications, we have to go through a router. Unfortunately, a router does not understand the idea of VLAN, which is a Layer 2 partition concept. For the router to route between each VLAN, a unique IP address is assigned to each VLAN so that the router can see each VLAN via the IP addresses. 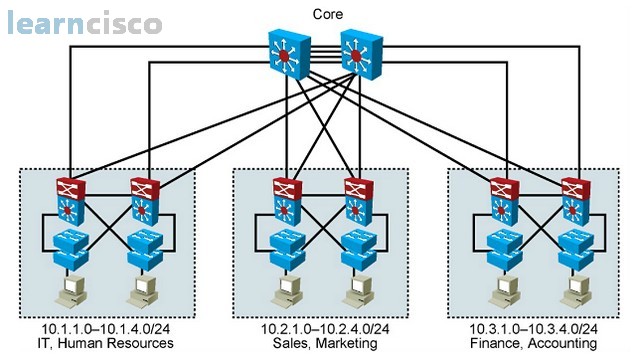 Designing VLANs for an Organization

Each VLAN in a switched network corresponds to an IP address for inter-VLAN communications. So, when planning the IP addresses, we should implement a hierarchical network addressing scheme, meaning that blocks of contiguous network addresses are reserved for and configured for devices in a specific area of the network. Some of the benefits of hierarchical addressing include the following:

So how many VLANs do you need in your organization? When we are designing a VLAN network, one method of determining the number of VLANs required is by looking at the traffic type. Network management traffic may warrant an independent VLAN, as does IP telephony voice traffic. If we have dedicated multicast devices, we can also consider having a unique multicast VLAN. Normal data traffic or scavenger traffic can be considered to have different VLANs as well.

The Catalyst switch implements VLANs by restricting forwarding to destination ports that are in the same VLAN groups as the originating ports. So when a data frame arrives on a switch port, the switch must retransmit the frame to only ports that belong to the same VLAN group. In essence, a VLAN that is operating on the switch limits transmission of unicast, multicast, and broadcast traffic to only within each partition group called the VLAN. Traffic originating from a particular VLAN floods to only ports in the same VLAN.

In this picture, we first talk about assigning data VLANs to ports. 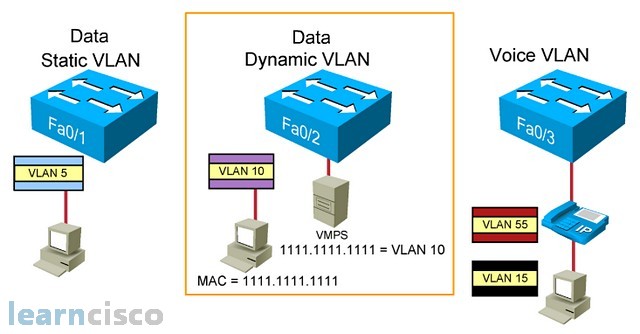 So, how does the port know which temporary VLAN to assign to this user? Well, there is a VLAN management policy server, which registers the user's MAC address to a particular VLAN. So, when the user is attached to a dynamic data VLAN port, the port queries the VLAN management policy server with the connected user's MAC address and determines which VLAN to temporarily assign to this port.

Now, imagine each user requires a data VLAN for their PC and a voice VLAN for their IP phone. Since we mentioned earlier, for better network control and management, we need to have data and voice VLAN having their own separate respective VLANs. The traditional idea for VLAN assignment is that one port is assigned to one VLAN, so we would need to have two switch ports for each user: one port for data VLAN and one port for voice VLAN. This would double the infrastructure switch port requirement in order to implement a Cisco IP telephony solution. The company would have to buy more Cisco switches even before considering the IP telephony deployment cost. So, Cisco engineers bend the traditional VLAN port assignment rules and allow the voice VLAN to be implemented on an existing data VLAN port, so that we can have two VLANs: the primary data VLAN and the secondary voice VLAN to be implemented together on the same port. But there are a few restrictions: you can never have two data VLANs sharing one port or two voice VLANs sharing one port. The main VLAN must always be a data VLAN and the secondary VLAN must be a voice VLAN. Also, this feature is only meant for Cisco IP telephony solution. Other company's IP telephony solutions cannot make use of this two-VLAN-in-one-port feature.

So the more effective way of connecting multiple VLAN switches together is to use a trunk link. But there is a problem associated with having all VLANs sharing the same transportation link. When we sent data frames from different VLAN groups across the same trunk link, the switch at the other end have no means of identifying which data frames belong to which VLAN groups. So, to overcome this shared link problem, we simply assign a VLAN tag to each data frame to allow the data frames to be VLAN identifiable.

So, tagging the Ethernet data frames helps to preserve the VLAN identity of the data frame as it is being sent through the trunk link. The solution is the same but different organizations have different means of tagging the data frame. Cisco introduced ISL trunking, which encapsulates the VLAN information around the Ethernet frame, while IEEE 802.1Q inserts the VLAN information into the existing Ethernet frame. Another difference between ISL and 802.1Q is that ISL requires all VLAN groups to be tagged with no exception, but for IEEE 802.1Q, it requires all VLANs to be tagged except one VLAN. This VLAN without a tag in 802.1Q is call native VLAN, and by default is assigned to VLAN 1.

802.1Q is the common trunking solution used in a switching network! 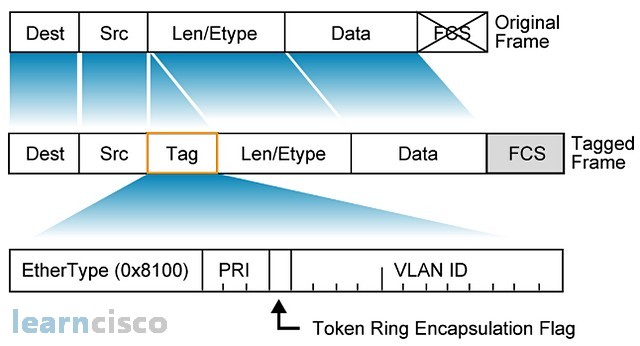 The VLAN information is inserted between the source field and the len/ethertype field. So, how does a device know that it is receiving a normal Ethernet frame or an elongated 802.1Q data frame? Well, besides inserting the VLAN information, we also insert a different piece of ethertype information. 0x8100 informs the recipients that it is receiving an 802.1Q data frame. Also, there is a priority bit in the tag to facilitate VLAN QoS.

The idea of a trunk link is to allow all VLANs to pass through, but there is a problem associated with trunk link. Now, in this scenario, all the three switches manually create their own VLANs. 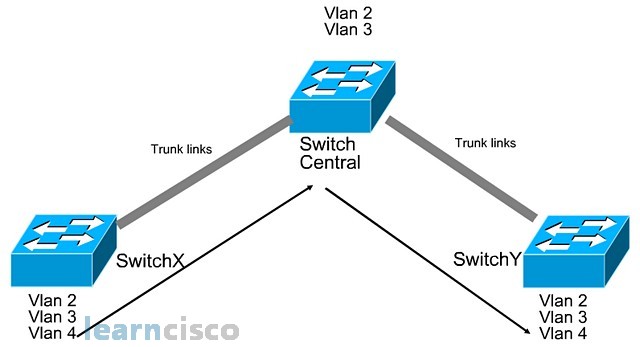 VTP stands for VLAN trunking protocol. It is a VLAN advertisement service that is advertised through all trunks links only. The objective of VTP is to synchronize the VLAN information across all switches.

There are three VTP modes:

These are the steps to configure VLANs and trunking:

Here are some guidelines to VTP configurations. On the catalyst switch, by default, the domain name is "none" and the VTP mode is server mode. VTP pruning is enabled or disabled depending on the model of the switch in question. The password is null and it uses VTP version 2. A new switch can automatically become part of a domain once it receives an advertisement from a server. The VTP client can overwrite a VTP server if it has a higher revision number. Normally, a client will have a lower or the same revision number as the server. We are talking about a special case here, where maybe a new server switch was brought into the VTP domain to replace a faulty VTP switch. And lastly, the domain name cannot be removed once it has been assigned. The name can be changed, but it can never be removed.

To manually configure the port to become an 802.1Q trunk, we simply go to the respective interface and use the command switchport mode trunk.

To add a VLAN, we first ensure that we are in the VTP server or transparent switch and not a client switch. Then, we use the command vlan 2, for example, in the global configuration mode, followed by the name command in the config vlan mode, which allows us to name the VLAN for humans' benefit. The switch only cares about the number. To illustrate my point, the example below shows two switches configured with VLAN 2, but each has a different VLAN name. But, the switch will still see it as the same VLAN 2, as the name is not important to the switches; the number is.

Assigning Switch Ports to a VLAN

To assign a port or interface to a VLAN, we simply use the command switchport access vlan 2, for example, under the respective interface.

To see which ports are assigned to each VLAN, we simply use the command show vlan brief.