Connecting to an Ethernet LAN

The network interface card, also known as LAN adapter, constitutes the interface of the computer with a LAN. It communicates with the network through a serial connection, and with the computer through a parallel connection. In its interaction with the computer, it requires an interrupt request line, or IRQ, an (I/O) address, and memory space within the operating system, uses drivers to provide intelligence to the hardware. Drivers are the software that rule the network interface card. The MAC address is burned onto each adapter by the manufacturer.

The cable and connector specifications used to support Ethernet are derived from the telecommunications industry, or TIA, which is an association that is part of the Electronic Industries Alliance, or EIA. These standards bodies created the RJ-45 connector specification, which is widely used in most of the flavors of Ethernet presenter here. One of the takeaways of this comparison matrix of different flavors of Ethernet is the terminology used to define them. This terminology will use three components. First component is a number, which defines the bandwidth available. For example, 10BASE-T is 10 Mb/s. Second component is whether it is basement or broadband. All of these are baseband or base. The third component defines a specification of the media used in that particular flavor. For example, 10BASE-T: T stands for twisted pair and it requires a twisted pair cabling.

FX, SX, and LX are definitions of fiber cabling, and where SX is for more short distances and multimode fiber, whereas LX is single mode fiber for more of a long-haul type distance. The media also defines distance limitations, and so twisted pair cabling will attenuate the signal at 100 meters where as the long haul will fiber attenuate after 3 to 10 kilometers.

Again, RJ-45 is a most popular Ethernet connector. RJ stands for Registered Jack and the number 45 refers to a specific physical connector that has eight conductors. A trend in designing network elements and devices is to build modularity into them. This means that you can buy the device and then add functionality by adding certain components or modules or simply upgrading those modules to, perhaps, bigger speeds or more functionality. An example of this is the GBIC, or Gigabit Interface Converter, which is a hot-swappable I/OPs that plugs into a Gigabit Ethernet ports. The figure shows a Gigabit Ethernet GBIC with an RJ-45 connector, but you can simply upgrade this and plug in a fiber connector for Gigabyte Ethernet technologies, which allows you to migrate and upgrade to, perhaps, SX-type technologies without having to change the device, only changing the interfaces on it.

Unshielded twisted-pair, also known as UTP, is a four-pair wire. Each of the eight individual copper wires is covered with an insulating material, and then all of them are covered in an outer jacket, which provides more protection. In addition, the wires in each pair are twisted around each other. This limits the signal degradation caused by electronic and radio frequency interference. UTP cable is used in the variety of types of networks. Its small size, thickness, and small connector make it a flexible option during installation and changes. It is also less expensive than other options, while at the same time reaching speeds and throughput up to 1 Gb/s. It continues to grow in popularity and it is supported and used in most of the LAN architectures. The thickness of the wires and the type of insulation, among other things, define different categories that also define the type of use for UTP cabling. For example, category 1 typically used in telephony environments, while CAT 6, or category 6, is necessary for 1 Gb/s transmissions.

The RJ-45 connector is ideal for terminating unshielded twisted pair wires. Each wire terminates in a pin location, which can be seen by looking at the connector from the front. Pin locations are numbered 1 through 8 starting on the right. Within each pair, the first wire is considered T and the second wire is considered R. This comes from tip and ring, a terminology that originated in the early days of the telephone.

The RJ-45 jack is the female component of the connection, where the RJ-45 connector is a male component. It belongs to the device wall or patch panel, and it also has pin locations. This time, if you look at it from the front, the pin locations are numbered from one through eight starting on the left.

Depending on how you terminate the wires on a RJ-45 connector, in terms of the order of the pin locations, You will obtain a straight-through cable or crossover cable. Straight-through cables are typically used to connect end devices to switches and network elements, whereas crossover cables are typically used for connections between network elements and devices, like switches. In a straight-through cable, the connectors on both ends of the cable will show the pin locations in the same order. If two RJ-45 connectors are held side by side in the same orientation, they will show the same order of the colored wires. This means that we are seeing a straight-through cable. In terms of the function of each wire, different pairs will be used for transmission and for reception; TX the nodes transmission while RX the nodes reception. Also, each pair sends both positive and negative signals to resist disturbance. 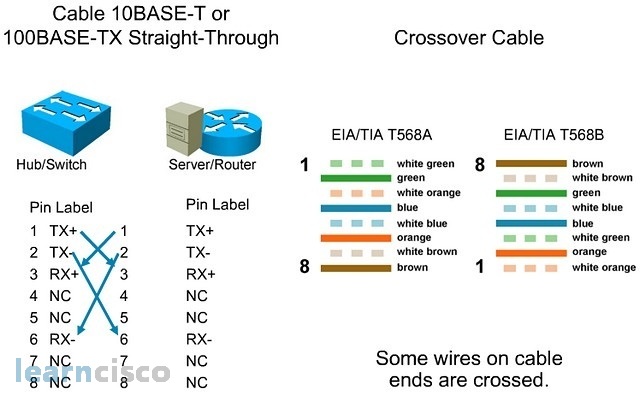