Distance vector protocols work by having each router advertise all the routes they know out all their interfaces. Other routers that share the same physical network receive the routing updates and learn the routes. The routers that share a common physical network are generally called neighbors. For instance, all routers attached to the same Ethernet are neighbors; the two routers on either end of a point-to-point serial link are also neighbors. If all routers advertise all their routes out all their interfaces, and all their neighbors receive the routing updates, eventually every router will know the routes to all the subnets in the network.

The following list spells out the basic distance vector logic and introduces a few important concepts:

The following examples explain the concepts in the list in a little more depth. The schematic below demonstrates how Router A’s directly connected subnets are advertised to Router B and the whole advertising process with the metrics of the routes. In this case, Router A advertises two directly connected routes and Router C – one. 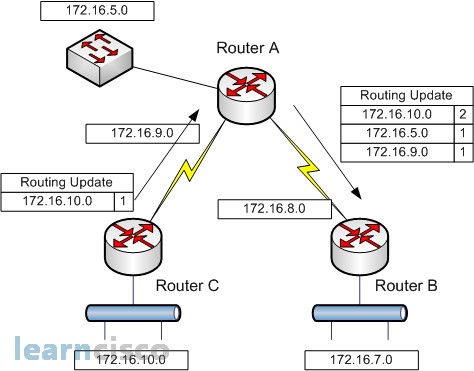 The following table shows the resulting routing table on Router B.

Two interesting facts about what a Cisco IOS software-based Cisco router puts in the routing table become obvious in this example. First, just like for any other directly connected route, the two directly connected routes on Router B do not have an entry in the table’s Next-Hop Router field, because packets to those subnets can be sent directly to hosts in those subnets. In other words, there is no need for Router B to forward packets destined for those subnets to another router, because Router B is attached to those subnets. The second interesting fact is that the Next-Hop Router entries for the routes learned from Router A show Router A’s IP address as the next router. In other words, a route learned from a neighboring router goes through that router. Router B typically learns Router A’s IP address for these routes simply by looking at the routing update’s source IP address.

Router B believes some subnets are nearer than others, based on the metric. The show ip route EXEC command shows connected routes as metric 0, because there is no router between Router B and those subnets. Router B uses a metric of 1 for routes directly connected to Router A for two reasons. First, Router A advertises those two routes (172.16.5.0 and 172.16.9.0) with metric 1, so Router B believes those metrics. (Router A, before advertising those two routes, adds 1 to the metric value of its own routes to those subnets.) Conceptually, one router (Router A) separates Router B from those subnets. Because RIP’s metric is hop count, a metric of 1 implies that only one router separates Router B from the subnets in question. Similarly, Router B’s metric for subnet 172.16.10.0 is 2, because the routing update from Router A advertises the router with a metric of 2. Conceptually, Router B believes that two routers separate it from 172.16.10.0.

The next core concept of distance vector routing protocols relates to when to doubt the validity of routing information. Each router sends periodic routing updates. A routing update timer, which is equal on all routers, determines how often the updates are sent. The absence of routing updates for a preset number of routing timer intervals results in the removal of the routes previously learned from the router that has become silent.