One key reason to use dialed connections of any kind, including ISDN, might be to send and receive data for only short periods of time. “Occasional” connections might be used by a site for which instant access to data is not needed, but for which access is needed a few times per day.

Routers frequently use ISDN to create a backup link when their primary leased line or Frame Relay connection is lost. Although the leased line or Frame Relay access link might seldom fail, when it does, a remote site might be completely cut off from the rest of the network. Depending on the network’s business goals, long outages might not be acceptable, so ISDN could be used to dial back to the main site. 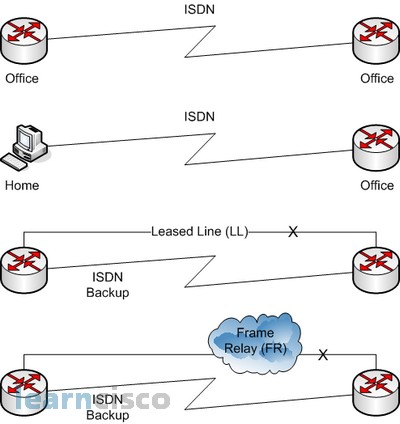 The above scenarios can be described as follows:

ISDN includes two types of interfaces: Basic Rate Interface (BRI) and Primary Rate Interface (PRI). Both BRI and PRI provide multiple digital bearer channels (B channels), over which temporary connections can be made and data can be sent. Because both BRI and PRI have multiple B channels, a single BRI or PRI line can have concurrent digital dial circuits to multiple sites, or multiple circuits to the same remote router to increase available bandwidth to that site.

B channels are used to transport data. B channels are called bearer channels because they bear or carry the data. B channels operate at speeds of up to 64 kbps, although the speed might be lower depending on the service provider. ISDN signals new data calls using the D channel. When a router creates a B channel call to another device using a BRI or PRI, it sends the phone number it wants to connect to inside a message sent across the D channel. The phone company’s switch receives the message and sets up the circuit. Signaling a new call over the D channel is effectively the same thing as picking up the phone and dialing a number to create a voice call.

In the following table are the characterizations of several key protocols. Be sure to learn the information in the Issue column. Knowing what each series of specifications is about is useful.

It’s also useful to memorize the specifications listed in the following table, as well as which OSI layer each specification matches.

The call setup and teardown messages themselves are defined by the Q.931 protocol. So, the local switch can receive a Q.931 call setup request from a router over the LAPD-controlled D channel, and it should react to that Q.931 message by setting up a circuit over the public network, as it is shown here:

The service provider can use anything it wants to set up the call inside its network, but between each local switch and the routers, ISDN Q.931 messages are used for signaling. Typically, Signaling System 7 (SS7) is used between the two switches-the same protocol used inside phone company networks to set up circuits for phone calls.

As soon as the call is established, a 64-kbps circuit exists between a B channel on each of the two routers shown above. The routers can use HDLC, but they typically use PPP as the data-link protocol on the B channel from end to end. As on leased lines, the switches in the phone company do not interpret the bits sent inside this circuit.

The D channel remains up all the time so that new signaling messages can be sent and received. Because the signals are sent outside the channel used for data, this is called out-ofband signaling.

An ISDN switch often requires some form of authentication with the device connecting to it. Switches use a free-form decimal value, call the service profile identifier (SPID), to perform authentication. In short, before any Q.931 call setup messages are accepted, the switch asks for the configured SPID values. If the values match what is configured in the switch, call setup flows are accepted. When you order new ISDN lines, the provider gives you some paperwork. If the paperwork includes SPIDs, you simply need to configure that number in the ISDN configuration for that line.