The first two concepts are not actually related to the dial process, but they relate to the process of choosing when to dial and when not to dial. The other two concepts relate to dialing, or signaling. The term signaling is used in ISDN to describe the processes of call setup and teardown. Many people say “dial” or “dialing” instead of signaling, but it means the same thing.

The following example provides the backdrop for these discussions. The branch router dials into the head office.

The router needs to route packets so that they are queued to go out the dial interface. Cisco’s design for DDR defines that the router receives some user-generated traffic and, through normal routing processes, decides to route the traffic out the interface to be dialed. Of course, routing protocols can not learn routes over a BRI line that is not normally up!

Together, Steps 1 and 2 of Legacy DDR logic determine when to dial a circuit. These combined steps are typically called triggering the dial. In Step 1, a packet is routed out an interface to be dialed, but that alone does not necessarily cause the dial to occur. The Cisco IOS software allows Step 2 to define a subset of the packets routed in Step 1 to actually cause the route to dial. 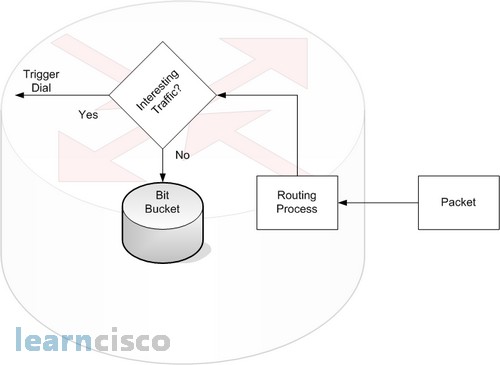 The choice in Step 2 is simply put like this: “Is this packet, which is being routed out this dial interface, worthy of causing the dial to occur?”.

The network engineer has control over what causes the dial, meaning that he or she also controls when the router spends the company’s money. Providers typically charge a base fee for the ISDN line, plus incremental charges per minute of use for a B channel. Two different methods can be used to define interesting packets. In the first method, interesting is defined as all packets of one or more Layer 3 protocols (for example, all IP packets). The second method allows you to define packets as interesting if they are permitted by an access list. IP access control lists (ACLs), create matching logic to match packets. ACLs consider the packets either permitted or denied. With DDR, if the access list permits the packet, it is considered interesting.

Here is one example:

!Use this one if all IP is considered interesting …

!
! OR use next statement to trigger for web to server Lois
! Note: If you typed the next command, it would replace the dialer-group 1
! command; only one dialer-group is allowed per interface!
!

Before the router can dial, or signal, to set up a call, it needs to know the phone number of the other router. Well, the command is dialer string string, where string is the phone number.

The only new command added here is dialer string, which shows the phone number that is to be used to signal a connection. The signaling occurs on the BRI’s D channel using Q.931 signaling. With only one site to dial, you can simply configure a single dial string. However, with multiple remote sites, the router needs to know each site’s phone number.

Two idle timers can be set. With the dialer idle-timeout seconds command, the idle time is set. However, if the router wants to dial other sites based on receiving interesting traffic for those sites, and all the B channels are in use, another shorter idle timer can be used. The dialer fast-idle seconds command lets you configure a typically lower number than the idle timer so that when other sites need to be dialed, the link that is currently up can be brought down more quickly.