What is Cisco Unity Connection? Well, it’s a messaging appliance. It’s going to run on Cisco’s flavor of the Linux operating system and a single server is going to be able to support as many as 20,000 users. We can have it acting as the voicemail or the messaging solution for Cisco Unified Communications Manager, Cisco Unified Communications Manager Express, even a PBX. We can have it integrate with Microsoft Exchange to have voicemail delivered to someone’s e-mail inbox for example. It supports WebDAV, which is going to allow users to import calendaring information from Microsoft Exchange. Another integration option is we could integrate with Microsoft Active Directory in a company that already uses Microsoft Active Directory and they already have user accounts created for everybody. Instead of creating duplicate user accounts for the messaging server, why not, why not just leverage those active directory accounts to create our Cisco Unity Connection users. 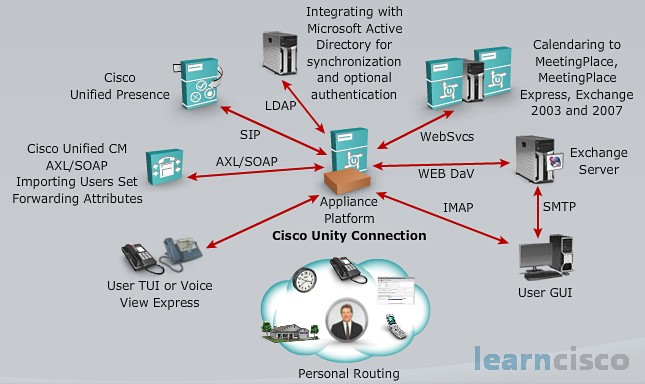 Even though we can deploy Cisco Unity Connection in a multisite model, in this module our focus is on a single site. And when we have a single site we don’t have to be concerned about transcoders. A transcoder will convert between a high bandwidth codec and a low bandwidth codec. Well, with the single site there’s no need to do that conversion because we’re not concerned about the bandwidth being consumed by the G.711 codec. We’re also not concerned about CAC (Call Admission Control) which makes sure that we’re not placing too many simultaneous calls across a wide area network because we’re not crossing the wide area network, we’re all at a single site. And at this single site, a single standalone Cisco Unity Connection server, it can support as many as 20,000 users.

Let’s consider how we integrate Cisco Unity Connection with Cisco Communications Manager Express using Skinny. The Skinny Client Control Protocol or SCCP built into the administrative interface of Communications Manager is a voicemail port wizard. If we launch this wizard we’ll be asked information such as how many voicemail ports do we want to create, what’s the beginning number of that voicemail port range. And after we go through this wizard-like interface the voicemail ports are going to be created for us and they’re going to be put into a line group. That’s not a complete configuration however we then need to take that line group and point at that line group with a hunt list. We then point at a hunt list with a hunt pilot, which has a pilot number. And we can indicate that we want that hunt pilot number to be used for voicemail use. In fact we can create a voicemail pilot number, which references that hunt pilot number and we can have a voicemail profile, which references the voicemail pilot number and we can make a profile a default profile as an example. And then when somebody goes off hook on their phone and they press the messages button, unless they have been otherwise configured pressing the messages button will invoke a call to the default voicemail profiles number, which is going to point to the default voicemail pilot number, which points to a specific hunt pilot number. And that’s going to give them connectivity into Cisco Unity Connection.

With a SIP integration between a Cisco Unity Connection and a Cisco Communications Manager, there are actually fewer configuration elements that we have to configure. We don’t go through the voicemail port wizard, we don’t create a hunt pilot or a hunt list or a line group. What we do is create a route pattern, and this route pattern is going to match the number that’s going to be used for voicemail access, and this route pattern is going to point to a SIP trunk. We configure a SIP trunk and that’s our communications link over to Cisco Unity Connection. And to create a SIP trunk you have to create another entity called a SIP trunk security profile but, it’s interesting that unlike the Skinny Client Control Protocol integration, with SIP the number of ports that we’re going to be using for voicemail, that’s not defined in Cisco Unified Communications Manager. Probably the most significant difference between a SIP and a Skinny integration is that we do not have to explicitly configure any Message Waiting Indicator directory numbers in Communications Manager.