Let's take a deeper look at partitions. Partitions are a way that we can group together destinations with the same reachability. This means that I should put directory numbers, any route patterns, might even put translation patterns, voice mail ports, conferencing numbers - all of them would be associated within the same partition. So that's the way that we would group together all of these devices that have the same reachability but this is just half of the puzzle so we create the partitions and we also now need to add them to the Calling Search Space.

Here for example there is a gateway that has a calling search space that contains the employee phone partition but not the managers phone, so the employees can be reached directly from the outside while this is not valid for the managers. Of course, most of the managers prefer to be reached through their secretaries and not directly; this is why the example is configured like that. So the most important thing is to take a look at the Calling Search Spaces and make sure they contain the appropriate partitions so that people can or cannot make those calls.

Partition <None> and CSS <None>

By default, when you install the Communications Manager Solutions, you haven't got any partitions or Calling Search Spaces created, so basically there is a "None" partition and "None" Calling Search Space. Everybody is in it. Every directory number, route patterns there in the none-partition and then the none-Calling Search Space is all basically behind the scenes associated with your phones and gateways and trunks. Entities that are in that none-partition are always accessible regardless of whether or not they have a calling search space. Here's the little "gotcha" you want to be aware of. Entities that have a Calling Search Space of none, can only access destinations that are in the partition of none. So in other words, if you want to restrict something, you could certainly set this up in this environment so that they now can't make any calls. One more thing - the partition "None" is a member of every Calling Search Space and it cannot be removed. Actually the "None" CSS and the "None" Partition cannot be edited. Why I'm telling you this - because if there is a device or end point in partition "None", it can be called directly from everyone!

Calling Search Spaces have an order of partitions in them. There is a relevance to the order of the partitions that are listed and so what happens is we could have multiple identical entities that could exist in the call routing table. But in order to have this work they have to be in different partitions. That way you can again put those ordered partitions in there. One exception to the rule is your phone directory numbers. If two or more devices share the same directory number within the same partition then this particular directory number is a shared line and so you wouldn't have to have a separate partition for that. You actually couldn't have a separate partition for that and the way it works is we have best match is searched but if any equally qualified matches exist and we don't have any single best match then the order of the partition in the Calling Search Space of that device is the tie breaker because you have to list them one after another so whoever's first in that instance would be the choice that we would make. 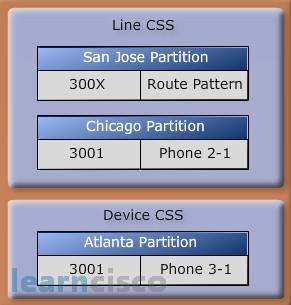 The Route Pattern though 300X is eliminated because there's actually a more explicit match 3001. So there's two entries in different partitions - Chicago and Atlanta. We now look at Chicago as being the winner here because it is listed first so when we're looking at the order I want you think as close to the source as possible. So we looked at the line Calling Search Spaces – oh there was a match, Chicago, there was a device Calling Search Space, that was Atlanta. That one came in really third on this list so we choose Chicago because it's more specific than San Jose over Atlanta as well because in this ordered list it's top-down approach closest to the source as possible, that's how we chose the Chicago partition.

So here's a breakdown of class of service examples. Very similar to what we saw previously where we have internal calls, and you can see how we create a Calling Search Space "Internal" and then we have no local call access, no long distance access, no international access. The thing they left off here is emergency. I wish they had done that, I want you to keep that in mind, I would never want a phone out there they couldn't dial emergency services. 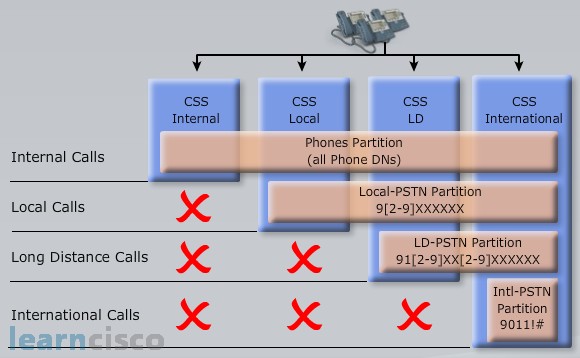 Then they create the Calling Search Space "Local" and they say okay internal gets added and local gets added. Then finally "Long distance" now has internal, local, long distance and then "International" would be assigned all of them and like I said don't forget about 911 or 112. I would make sure that was a separate class of service that every phone had attached to it.