Now let's tackle Hunt Groups. It's a similar hierarchical approach that we saw with our route patterns, route lists, route groups. We have a pilot number for the Hunt Group. So there's a Hunt Pilot, it points to a Hunt List, a line group, and then directory numbers. In other words we have to have directory numbers created first, those directory numbers get added to a Line Group, which then gets added to a Hunt List which then gets pointed to by that Hunt Pilot number. So it's a similar process and we can even assign voicemail ports to these Line Groups because they also could be a final answering position. Maybe if everybody's busy and on the phone, then the final last resort is that call winds up possibly in a voicemail box, or a general box, that's going to take a message so someone can go back later and call them back.

Let's break each entity down now. The Hunt Pilot Number: This is the number that is going to be dialled and it's actually going to start the hunting process, so it's the main number. We can perform digit manipulation here, we can point directly to a Hunt List, so we don't have to go through the whole hierarchy, but I highly advise it, especially if you think things are going to change. It's much easier if you go through the whole approach than you do the shortcut, but you could point directly to the Hunt List.

We can also specify some timers. There's a maximum Hunt Timer and there is also a Final Forwarding setting. Here's what happens. How long do you want someone to rotate through these directory numbers? Do you want someone to sit out there on hold for 20 minutes or do you want something to happen to that call after 2-3 minutes. And you want it maybe to then get routed to a voicemail box or routed off to another destination. Those are options you have, that's what your Final Forwarding setting is all about. I've gone through, I've attempted to get through all of these hunting options I've hit my maximum Hunt Timer, now what do I want to have take place. Well if I forwarded the call, like maybe I'm at extension to 2020 the call came into me and I say, oh you need to talk to someone in customer service and I send the call over, let's say customer service is extremely busy and all of my maximum hunt timers now get expired. wWat do I want to have happen, do I want that person to get dumped into voicemail or do I want them to come back to me? Maybe they need to come back to me, and I'm like, "Oh I am so sorry, customer service must have been busy, do you want to hold again or you want me to take your name and number and then as soon as somebody frees up, they'll call you back", that sort of situation. So, depending upon how you want your hunting to take place, where you want that call to land ultimately, obviously, you'd want someone to answer it, but if they couldn't what would you want to have happened to that caller. 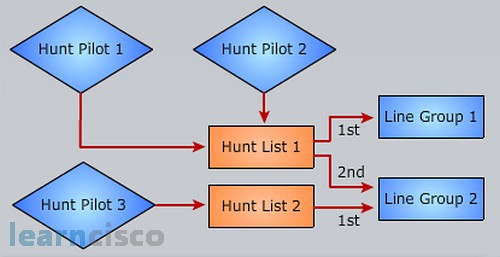 We're now kind of like a pointer in the Hunt List area. We're actually pointing to things and receiving things, so we're kind of that go between.

The Line Group is containing the people - the answering positions. This could be an IP phone extension or it could be a voicemail port. The same extension could be contained in multiple Line Groups and there is also a Ring No Answer Reversion. This is a time out value that specifies how long we're going to attempt to the ring a member of that Line Group, because again our goal here is not to let people just go on indefinitely. And we also want to put in a reasonable amount of time for the phone to ring, in case I stepped out for a second, then I hear my phone ring and I can run back and grab it, so I want to give people enough time to answer that call and then of course we also want it to attempt to move on if nobody does answer.

Within the line group we have a distribution algorithm, because we've got all these directory numbers sitting out here. How do we want calls rotated through? 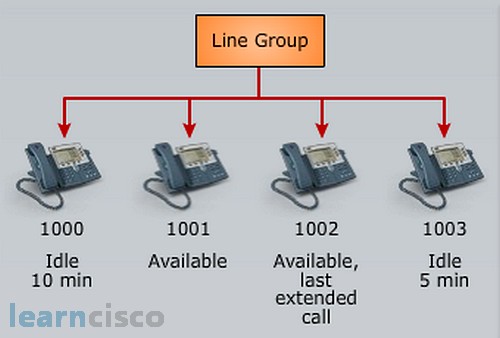 Top down? That's when somebody is idle and available and it's a round robin fashion.

Longest idle is probably one of the fairest of the distribution algorithms I think, and that is, okay who has been sitting around waiting the longest here, looks like the idle phone here is extension 1000, they've been idle for 10 minutes, go ahead and send the call to them they need some work to do.

Then finally broadcast. Now you see broadcast used in an environment where maybe you have multiple phones on a counter top. While some people behind the counter are with customers face-to-face and others are available, those that are available could turn around and take and answer the incoming calls. That's your broadcast environment, all your phones are ringing whoever grabs that call first, they're the winner of that incoming call.