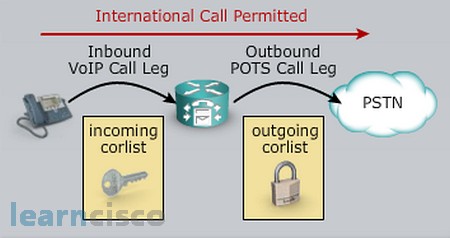 Basically, the way I think of it is we have locks and maybe we have multiple locks. We have to have a key to open all of the locks. If we can only open two of the three locks we can't get through, so we're going to see how COR can impact whether or not we are able to call internationally, long distance, maybe even internally depending upon how you want to setup your blocking.

By default our corlist command, it kind of behaves a little strange, because if we have no incoming corlist command configured on a dial-peer, the default incoming COR list is used, and basically that default says "let him through". And on an outgoing corlist command if that's configured on a dial-peer, the default outgoing COR list is used. The default outgoing COR list has the lowest possible priority that means everybody gets through regardless of their incoming COR lists. So I also want you to think of, by default, when we create our dial-peers, if we don't put any restrictions anywhere then everybody is able to call through those dial-peers whether it's the Communication Manager Express or if we set it up in a H.323 environment with a full-blown Communications Manager, if we don't put any restrictions in place like partitions and calling search spaces then basically it is a free for all. There is no restriction, everybody can dial through these dial-peers to make their calls.

Hopefully this example will help us visualize how this works. Here we have devices that are broken down into a local COR, a long distance COR and an international COR. So, what would happen is we would set up COR members and the members would have, like, intuitive names. This is how I would do it, I would say 911, local, long distance and international. Then I would configure outbound COR lists and I would say my dial-peer contains a COR list of 911 and the member is 911. Then I'd say my dial-peer has a COR list of local and a member of local and long distance and international and so on. Then we would configure our inbound COR lists showing the same thing. I would have my 911, my local, my international. Then once I've done that I would then apply that to my outbound COR list to the PSTN dial-peers, then again my inbound COR list coming into the dial-peers, coming into my e-phones.

So looking at this example what would happen if that top phone COR local attempted to make a call. Well the COR local phone only has a couple of keys. Now I'm going to assume, and it's a very good practice, everybody can dial 911, so if I were to dial 911 from that phone I'd make it. Because it says COR local, I'm going to assume again that we only have the key to unlock the local pathway through the Communications Manager Express, so in other words I could dial probably a seven digit number. If I try to dial long distance or international, I would not have the appropriate keys. The middle phone, that says long distance COR, that has three keys and you can see it can dial emergency, local and long distance, it does not have the key for international, so it would be blocked if it attempted to dial that particular dial-peer. Then finally, we have a phone labeled "International", that phone has all four keys to unlock all the locks, so it would be able to dial emergency, local, long distance, and international.