When LAN designs require multiple switches, most network engineers include redundant Ethernet segments between the switches. The goal is simple. The switches might fail, and cables might be cut or unplugged, but if redundant switches and cables are installed, the network service might still be available for most users.

LAN designs with redundant links introduce the possibility that frames might loop around the network forever. These looping frames would cause network performance problems. Therefore, LANs use Spanning Tree Protocol (STP), which allows the redundant LAN links to be used while preventing frames from looping around the LAN indefinitely through those redundant links.

Here is shown a simple STP tree with one port on SW3 in blocking state. 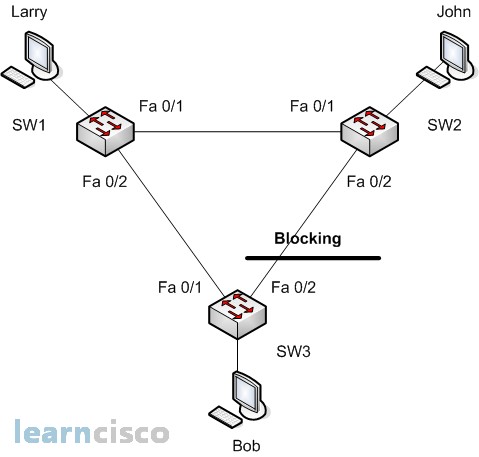 When Larry sends a broadcast frame, the frame does not loop. SW1 sends a copy to SW3, but SW3 cannot forward it to SW2 out its port 0/2 because it is blocking. SW1 sends the broadcast to SW2, who forwards it to SW3, but SW3 ignores frames that enter port 0/2. However, STP causes some frames to use a longer physical path for the sake of preventing loops. For instance, if John wants to send a frame to Bob, the frame has to go from SW2 to SW1 and then to SW3-a longer path than is physically required. STP prevents the loops, but you then have to live with a less-efficient path for some traffic. Of course, at LAN speeds, a user typically wouldn't notice any difference in performance unless the network was also badly congested as a result of the traffic patterns.

If the link between SW1 and SW3 fails, STP converges so that SW3 no longer blocks on its 0/2 interface. For instance, in Figure 2-2, that link has failed, and STP has converged.