As soon as you know what needs to be filtered, the next step is to decide where to filter the traffic. The following image serves as an example. In this case, imagine that Bob is not allowed to access the WWW Server, but Larry is.

Filtering logic could be configured on any of the three routers and on any of their interfaces. The dotted arrowed lines in the figure show the most appropriate points at which to apply the filtering logic in an ACL. Because Bob's traffic is the only traffic that needs to be filtered, and the goal is to stop access to WWW Server, the access list could be applied at either R1 or R3. And because Bob's attempted traffic to WWW Server would not need to go through R2, R2 would not be a good place to put the access list logic. For the sake of discussion, assume that R1 should have the access list applied.

Cisco IOS software applies the filtering logic of an ACL either as a packet enters an interface or as it exits the interface. In other words, IOS associates an ACL with an interface, and specifically for traffic either entering or exiting the interface. After you have chosen the router on which you want to place the access list, you must choose the interface on which to apply the access logic, as well as whether to apply the logic for inbound or outbound packets. For instance, imagine that you want to filter Bob's packets sent to WWW Server. The following picture shows the options for filtering the packet. 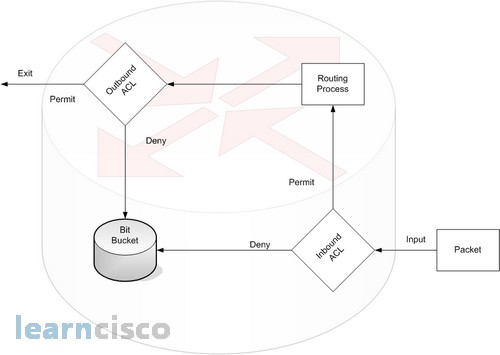 Filtering logic can be applied to packets entering S1 or to packets exiting E0 on R1 to match the packet sent by Bob to WWW Server. In general, you can filter packets by creating and enabling access lists for both incoming and outgoing packets on each interface. Here are some key features of Cisco access lists:

Access lists have two major steps in their logic: matching and action. Matching logic examines each packet and determines whether it matches the access-list statement. For instance, Bob's IP address would be used to match packets sent from Bob. IP ACLs tell the router to take one of two actions when a statement is matched: deny or permit. Deny means to discard the packet, and permit implies that the packet should continue on its way.

1. Look for packets with Bob's source IP address and WWW Server's destination IP address. When you see them, discard them.
2. If you see any other packets, do not discard them.

Cisco calls its packet-filtering features "Access Control Lists" in part because the logic is created with multiple configuration commands that are considered to be in the same list. When an access list has multiple entries, IOS searches the list sequentially until the first statement is matched. The matched statement determines the action to be taken. The two diamond shapes in the image above represent the application of access list logic.

The logic that IOS uses with a multiple-entry ACL can be summarized as follows:

Regardless of whether you use standard or extended IP ACLs, you can tell the router to match based on the entire IP address or just a part of the IP address. For instance, if you wanted to stop Bob from sending packets to WWW Server, you would look at the entire IP address of Bob and WWW Server in the access list. But what if the criteria were to stop all hosts in Bob's subnet from getting to WWW Server? Because all hosts in Bob's subnet have the same numbers in their first three octets, the access list could just check the first three octets of the address to match all packets with a single access-list command.

The wildcard masks were mentioned in the previous parts of the course, but here is the example table once again:

Before diving into the configuration, here's a quick review of how standard IP ACLs work:

The following example attempts to stop Bob's traffic to WWW Server. You can see two different ways to set the same rule: