Frame Relay is still one of the most popular WAN services deployed over the past decade, and there's a good reason for this-cost. By default, Frame Relay is classified as a non-broadcast multi-access (NBMA) network, meaning it doesn't send any broadcasts like RIP updates across the network. Frame Relay has at its roots a technology called X.25, and it essentially incorporates the components of X.25 that are still relevant to today's reliable and relatively "clean" telecommunications networks while leaving out the no-longer-needed error-correction components. It's substantially more complex than the simple leased-line networks you learned about when I discussed the HDLC and PPP protocols, but is still relevant when looking at even the most commonly used networks. The leased-line networks are easy to conceptualize - but not so much when it comes to Frame Relay. It can be significantly more complex and versatile, which is why it's often represented as a "cloud" in networking graphics.

First, understand that Frame Relay is a packet-switched technology:

If, for example, you had to add seven remote sites to the corporate office and had only one free serial port on your router-it's Frame Relay to the rescue! Of course, I should probably mention that you now also have one single point of failure, which is not so good. But Frame Relay is used to save money, not to make a network more resilient. Take a look at the picture below to get an idea of what a network looked like before and after Frame Relay. 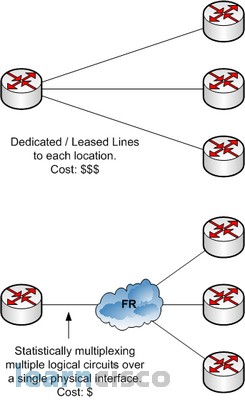 Frame Relay provides a packet-switched network to many different customers at the same time. This is a really good thing because it spreads the cost of the switches among many customers. But remember, Frame Relay is based on the assumption that all customers won't ever need to transmit data constantly, and all at the same time. Frame Relay works by providing a portion of dedicated bandwidth to each user, and it also allows the user to exceed their guaranteed bandwidth if resources on the telco network happen to be available. So basically, Frame Relay providers allow customers to buy a lower amount of bandwidth than what they really use. There are two separate bandwidth specifications with Frame Relay:

If these two values are the same, the Frame Relay connection is pretty much just like a leased line. But they can also be set to different values. Here's an example: Let's say that you buy an access rate of T1 (1.544Mbps) and a CIR of 256Kbps. By doing this, the first 256Kbps of traffic you send is guaranteed to be delivered. Anything beyond that is called a "burst"- a transmission that exceeds your guaranteed 256Kbps rate, and can be any amount up to the T1 access rate (if that amount is in your contract). If your combined committed burst (the basis for your CIR) and excess burst sizes, known as the MBR or maximum burst rate when combined, exceed the access rate, you can pretty much say goodbye to your additional traffic. It will most likely be dropped, although this really depends on the subscription level of a particular service provider.

There are two types of virtual circuits-permanent and switched. Permanent virtual circuits (PVCs) are by far the most common type in use today. What "permanent" means here is that the telco creates the mappings inside their gear and as long as you pay the bill, they'll remain in place. Switched virtual circuits (SVCs) are more like a phone call. The virtual circuit is established when data needs to be transmitted, then it's taken down when the data transfer is complete.

Let me explain-suppose you have a central HQ with two branch offices. If you were to connect each branch office to HQ using a T1, you would need two serial interfaces on your router at HQ, one for each T1. Well, suppose you use Frame Relay PVCs instead. You could have a T1 at each branch connected to a service provider and only a single T1 at HQ. There would be two PVCs on the single T1 at HQ, one going to each branch. And even though there's only a single interface and a single CSU/DSU, the two PVCs function as three separate circuits. The exact example is shown below: 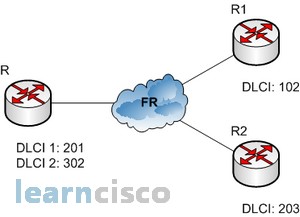 Before we go on, I want to define Inverse ARP (IARP) and discuss how it's used with DLCIs in a Frame Relay network. It is somewhat similar to ARP in the fact that it maps a DLCI to an IP address-kind of like ARP does with MAC addresses to IP addresses. And even though you can't configure IARP, you can disable it. It runs on a Frame Relay router and maps the DLCI to an IP address for Frame Relay so it knows how to get to the Frame Relay switch. You can see IP-to-DLCI mappings with the show frame-relay map command. But if you have a non-Cisco router living in your network and it doesn't support IARP, then you're stuck with having to statically provide IP-to-DLCI mappings with the frame-relay map command.

There are three different types of LMI message formats: Cisco, ANSI, and Q.933A. The different kinds in use depend on both the type and configuration of the telco's switching gear, so it's imperative that you configure your router for the correct format, which should be provided by the telco.