If you are familiar with TCP and UDP you probably know that both work at the Transport layer, and that TCP is a reliable service and UDP is not. This means that application developers have more options because they have a choice between the two protocols when working with TCP/IP protocols. The Transport layer is responsible for providing mechanisms for multiplexing upper-layer applications, establishing sessions, and tearing down virtual circuits. It also hides details of any network-dependent information from the higher layers by providing transparent data transfer.

Data integrity is ensured at the Transport layer by maintaining flow control and by allowing users to request reliable data transport between systems. Flow control prevents a sending host on one side of the connection from overflowing the buffers in the receiving host-an event that can result in lost data. Reliable data transport employs a connection-oriented communications session between systems, and the protocols involved ensure that the following will be achieved:

In reliable transport operation, a device that wants to transmit sets up a connection-oriented communication with a remote device by creating a session. The transmitting device first establishes a connection-oriented session with its peer system, which is called a threeway handshake. Data is then transferred; when finished, a call termination takes place to tear down the virtual circuit.

The following figure depicts a typical reliable session taking place between sending and receiving systems. Looking at it, you can see that both hosts' application programs begin by notifying their individual operating systems that a connection is about to be initiated. The two operating systems communicate by sending messages over the network confirming that the transfer is approved and that both sides are ready for it to take place. After all of this required synchronization takes place, a connection is fully established and the data transfer begins. 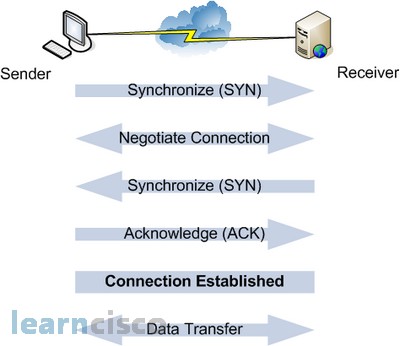 Sometimes during a transfer, congestion can occur because a high-speed computer is generating data traffic a lot faster than the network can handle transferring. A bunch of computers simultaneously sending datagrams through a single gateway or destination can also botch things up nicely. In the latter case, a gateway or destination can become congested even though no single source caused the problem. In either case, the problem is basically akin to a freeway bottleneck - too much traffic for too small a capacity.

The machine which receives a flood of datagrams can stores them in a memory section called a buffer. But this buffering action can only solve the problem if the datagrams are part of a small burst. If not, and the datagram deluge continues, a device's memory will eventually be exhausted, its flood capacity will be exceeded, and it will react by discarding any additional datagrams that arrive.

Because of the transport function, network flood control systems really work quite well. Instead of dumping resources and allowing data to be lost, the transport can issue a "not ready" indicator to the sender or source of the flood. This mechanism works kind of like a stoplight, signaling the sending device to stop transmitting segment traffic to its overwhelmed peer. After the peer receiver processes the segments already in its memory reservoir-its buffer-it sends out a "ready" transport indicator. When the machine waiting to transmit the rest of its datagrams receives this "go" indictor, it resumes its transmission.

A service is considered connection-oriented if it has the following characteristics:

Ideally, data throughput happens quickly and efficiently. And as you can imagine, it would be slow if the transmitting machine had to wait for an acknowledgment after sending each segment. But because there's time available after the sender transmits the data segment and before it finishes processing acknowledgments from the receiving machine, the sender uses the break as an opportunity to transmit more data. The quantity of data segments (measured in bytes) that the transmitting machine is allowed to send without receiving an acknowledgment for them is called a window.

Reliable data delivery ensures the integrity of a stream of data sent from one machine to the other through a fully functional data link. It guarantees that the data won't be duplicated or lost. This is achieved through something called positive acknowledgment with retransmission - a technique that requires a receiving machine to communicate with the transmitting source by sending an acknowledgment message back to the sender when it receives data. The sender documents each segment it sends and waits for this acknowledgment before sending the next segment. When it sends a segment, the transmitting machine starts a timer and retransmits if it expires before an acknowledgment is returned from the receiving end.